The Walk to End Alzheimer’s helped this caregiver find support

Sonia learned about Alzheimer’s Association services through the Walk and has stayed involved for eight years.

Sonia Calvo, of San Jose, has participated in the Silicon Valley Walk to End Alzheimer’s since 2011. She walked because her mother, Chala, was living with dementia. After Chala died in 2012, Sonia was faced with free time that she had previously spent caregiving. She decided to use that time to serve on the Walk Planning Committee. Sonia shares team captain duties for Team Chala with her nine year old nephew, Santiago.

What was your mom like before she developed dementia? 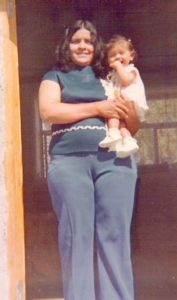 Mom was a homemaker who raised nine children. She was an amazing cook, loved to knit and crochet and was great at needle point.

She was a very hard worker. During the summers she worked in the fruit canning industry in the Silicon Valley.

What first concerned you about her health?
In the beginning, there were different things happening in her life. She used to go to work and see her friends. It had been her summer routine.

She retired when the canning company closed. As a daughter, I thought that she was sad about not being able to work anymore.

She was also a diabetic. Her diabetes led to vision problems. We felt that she shouldn’t be left alone at home. My father, JosÃ©, retired so that we would all have peace of mind.

The turning point for me happened when my sister called to tell me that Mom had left the house alone. Normally, Mom would get tired just walking to the street.

In my mind I asked “where could she have gone?! She loses her breath so easily.” I quickly drove to my parent’s house.

By the time I arrived, my sister and dad had found her. Luckily, Mom was still in a residential area.

What was it like after your mom was diagnosed with dementia?
As her dementia progressed she had difficulties later in the day. She had a hard time with Dad, even though they had been married over 50 years. They spent all day together, but in the evening, she would ask why she was “in this house with this man.”

It was hard for me to see my mom go through this. I knew it wasn’t out of malice or spite for Dad. It was also difficult to see my dad lose his life partner right before his eyes, as he cared for her.

Mom wandered a few more times. Dad would call my sister, Nilda, who lived nearby. When they found her, Mom would say that she was on her way to her daughter’s house. Before developing dementia, Mom would never have walked there.

What was your family’s biggest caregiving challenge?
I didn’t know where to look for help. I wish one of Mom’s healthcare providers would have told us about the programs available through the Alzheimer’s Association.

My father, siblings and I did the best we could. It wasn’t until I heard about the Walk to End Alzheimer’s that I researched the Association and found all of these services and support systems.

Some of my siblings are still in denial that mom even had dementia. They had a hard time believing their own parent would not know who they were.

I tell them, “she forgot. It’s not because she didn’t love you and forgot who you were. It was the disease.”

As a caregiver or child, it gets to the point that whether she could remember didn’t matter. It was more about what we remembered and the love we gave her. Mom died in 2012.

How did you form a team?
My team grew organically. At first, I asked my family. Several agreed to join me.

Her nieces, nephews and grandkids were very close to her. They saw what our family was going through and were very supportive.

How do you raise funds?
I’ve been lucky to have a very devoted and loyal group of friends and colleagues who contribute. They know how close and dear this cause is to my heart.

As time has gone on, friends have lost loved ones to Alzheimer’s. The support continues to grow.

I ask everyone who donates if their company offers matching gifts. Many companies will do that.

My employer, Advent Software, matches employee donations. If one of my colleagues donates to the Walk, all they have to do is submit the paperwork to request the match. When I invite my colleagues to donate, I include our company’s matching gifts link in the email.

Tell us about your co-captain.
Last year before the team captain kickoff event, my nephew, Santiago, started asking, “what do I have to do to be a captain like you?” I’m not the type of aunt to say no. 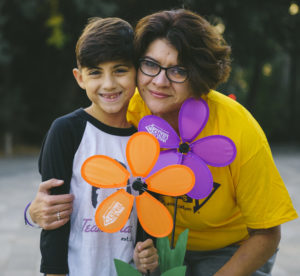 At the kickoff, Santiago asked, “who’s in charge here?” He went up to Alicia, the Walk Manager and asked “so how do I become a team captain? I’m seven, but I’ll be eight in August.” Alicia told him, “that’s exactly the age you need to be to become a captain.”

He’s my co-captain and he helps out with the Walk as much as he can. Santiago’s school principal wrote an article about his involvement in the Walk that appeared in a local publication.

What made you decide to join the Walk committee?
Mom was at a care facility for the last 18 months of her life. I’d go every day and stay until eight p.m.

Within around nine months of Mom’s death, I knew that I had to do something. I’d come home and think, “this is when I’d go see Mom and I can’t see her anymore.”

I hadn’t made time for volunteering since high school. I needed to do something with my free time that both mom and I would be proud of.

The 2012 Walk to End Alzheimer’s was our team’s second Walk, but the first without Mom. When I was registered, one of the questions was, “would you be interested in volunteering?” I marked yes.

In January 2013, I went to my first Walk Planning Committee meeting. I met Matt, the Team Retention Subcommittee Chair, who was a junior in college. You would have thought that this was his full time job. I gravitated towards his enthusiasm.

I have loved being on the committee. I’ve been very lucky that the staff and committee members are amazing. We’re driven people who have a high regard for our personal time. We choose to spend our time with the Walk committee.

What is your favorite part of Walk day?
I love when I arrive early on Saturday morning, the sun is coming out and the whole area is purple. Even after seven years, it’s still very emotional.

It is encouraging to see everyone arrive and feel the enthusiasm across every single person. It’s a day of celebrations, mourning and support.

Teams are getting together and having coffee. There are people who met in support groups and end up volunteering. It’s like a reunion.

What would you say to encourage others to join the Planning Committee?
The Walk to End Alzheimer’s is a very positive experience. We’re all there for one cause and it has an emotional undertone. 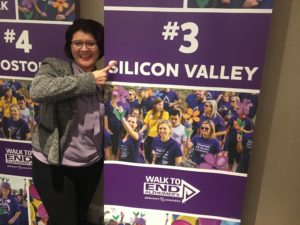 We raise awareness because we’ve lost someone, are caregiving or are living with Alzheimer’s. There’s such a high level of energy and love around the Walk.

The time and effort I put into the Walk to End Alzheimer’s is helping families and friends get support. They can get a service they didn’t even know they needed: education, support and respite.

You’d be amazed at the love, time and devotion the committee puts in to make the event a success for every single walker. With 10 months of hard work by everyone involved, it becomes an amazing event. They say, “it takes a village” and when it comes to planning a Walk, that’s true.

Sonia invites you to join Team Chala or form your own team for the Walk to End Alzheimer’s near you. You can also learn more about the Walk Planning Committees.