Learning to Accept a New Mother, a New Way 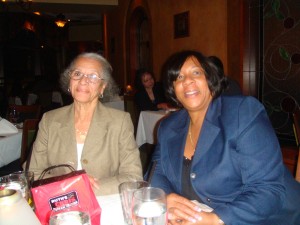 “I told you I’m not going anywhere and I don’t want anyone in my house. I can take care of myself. You all are trying to get rid of me.” Mama had her hands on her hips, eyes sternly looking at my sister and I.

“We are not trying to get rid of you. We are trying to help you.” Florence let out a frustrated sigh.

Here we were again trying to convince our mother that it was time to do something about her “condition.” There were calls in the early morning or late at night about lost keys and purses or crying because she couldn’t remove nonexistent contact lenses. It had started gradually like forgetting things but, hey, don’t we all? But then we found ourselves answering the same questions over and over. My aunt, Mama’s younger sister, called me from southern California in the summer of 2009, after returning from the family reunion we had all attended in their native Arkansas, with some concerns about Mama’s behavior she had noticed.  In May of 2010 when we all went to see my niece graduate from college in Virginia, Mama stayed in a room at the hotel resort with my daughter and I. We witnessed what I call an episode that was so out of character: Mama accused us of taking her things and was unaware of where we were and the reason we were there.

Mama’s behavior change was the hardest for me. The sweet little southern born and raised lady was behaving so unreasonably, nothing like the mother I knew. My parents left Little Rock in the 1950s when my brother and I were babies, as part of the great migration of African Americans leaving the South to embark on a better life for their families in California. As a teacher, Mama returned to college at U.C. Berkeley for a California teaching credential and taught almost 40 years in Oakland Public Schools. She retired with a good pension and had the foresight to take out long-term care insurance. Her mantra was “I don’t want to be a burden to my children.”

But of course that all went by the wayside; when we would remind her of that, she would just look perplexed. She would snap at us, was confrontational and said mean things. The mother I knew did not intentionally say hurtful things. But we finally realized there was no reasoning with someone who had dementia.

When Mama was finally diagnosed with Alzheimer’s it was no surprise. Her mother, Grandmother Otelia, was given that diagnosis and died at age 90. I recently learned through the Alzheimer’s Association that the disease is more prevalent among African Americans and has a greater familial risk.  Of course this is problematic, but even more troubling is that the “Silent Epidemic” appears to be a stigma in our community.

While my sister and I were wrestling with what to do with our mother, we encountered others who are struggling with parents suffering from dementia and Alzheimer’s. Many of them were against “putting mother away” and wrestled with how to care for their loved ones. But perhaps it is a multicultural issue, as I recall being at the nail salon where a Latina and an Asian woman were talking about their elderly mothers and they both emphasized they would never put their mothers in a facility.

Mama is now settled in a good facility and, with medication and acceptance, she is doing well enough to recall some of the family history in my genealogy research. What I have concluded is that my job, as a daughter of a mother with Alzheimer’s disease, is to maintain awareness of the issues, educate myself, seek out the best treatment and care for my mother and lastly, take care of myself physically, mentally and emotionally.

Helpful information about this story: