When you think of football, you tend to associate it with fans in team jerseys, Sunday afternoon tailgating, cheerleaders and men taking the field. However, women across the country played some of the best football games this summer. We played flag football to win the battle against Alzheimer’s disease. 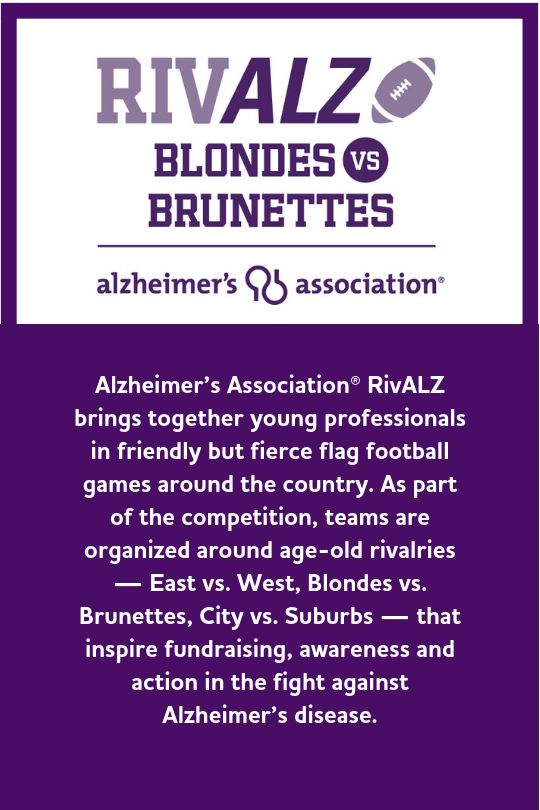 In the last few years of my grandmother’s life, I could see that her memory was fading. She struggled to remember our faces, where she was and her own identity. Like many individuals living with Alzheimer’s or another form of dementia, my grandmother never received a diagnosis.

RivALZ® participants raise funds and awareness for the Alzheimer’s Association. When the opportunity to join this cause was presented, I knew I had to be involved.

Two Teams, One Goal: Tackling Alzheimer’s
I joined RivALZ through my friend, Lisa Casner, who played in the first year of the San Francisco fundraiser. For the last five years I’ve looked forward to spring, when RivALZ practices start. 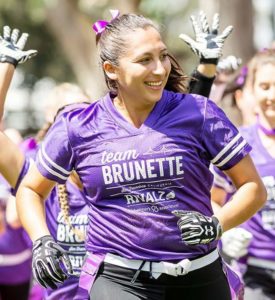 The friendships and memories have kept me coming back. As a fifth year player, Captain for Team Brunettes and RivALZ Co-Chair, I knew this season would be the best yet.

Lead up to the game

Every Monday, we met for practice, getting better each week and learning the game of football. We held fundraisers such as restaurant nights, karaoke and wine tasting. These opportunities allowed the Blondes and Brunettes teams (redheads are free agents) to come together for a common goal.

As we got closer to game day, we thought about who could share their story during half time. I immediately thought of Claudia Contreras, fourth year player for Team Brunettes. Claudia’s grandmother was diagnosed with Alzheimer’s six years ago.

For a beloved grandma 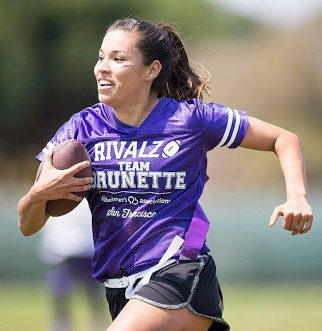 During her speech on game day, Claudia shared: “I play for my grandma. I play for my friends who have family members with younger-onset Alzheimer’s. I play for all of the women in my life. And lastly, I play for my entire family, sitting in the stands. They have supported me since day one. We’re all in this together.”

Competition for a common goal
RivALZ Blondes vs. Brunettes has proven to be more than just a fundraiser for us. We are a group of dedicated coaches and women who all have a deeper connection to this cause. A world without Alzheimer’s is our goal and we will continue to take to the field until there’s a cure. 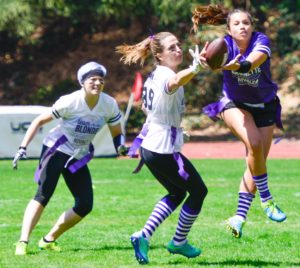 While Team Blondes won the game, Team Brunettes is currently leading in the fundraising. Together, the women have raised over $42,000 for Alzheimer’s care, support and research. It’s not too late to donate to Team Blondes or Team Brunettes. If you’d like to learn more about participating in future RivALZ games, contact Steven Krzanowski, Constituent Events Manager, at skrzanowski@alz.org or 415-463-8507.