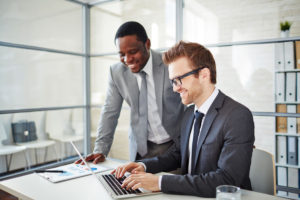 New data suggests that people whose work requires complex thinking and activities are better able to withstand the onset of Alzheimer’s disease. Results “” reported at the 2016 Alzheimer’s Association International Conference (AAIC) in Toronto last month “”suggest that working with people, rather than data or physical things, contributed the most to the protective effect.

According to researchers, formal education and work may increase resilience to cognitive decline and dementia, even in people at high risk for the disease because of unhealthy diet or blood vessel problems in the brain. Canadian researchers measured adherence to a traditional “Western” dietary pattern in 351 independently living older adults. The Western diet is characterized by consumption of red and processed meats, white bread, potatoes, pre-packaged foods and sweets. Alongside each participant’s educational attainment, occupational complexity and social engagement, responses to a questionnaire on food consumption were analyzed and considered.

“Our results show the role higher educational attainment, mentally stimulating work and social engagement can play in protecting your brain from cognitive decline, counteracting some negative effects of an unhealthy diet,” says Matthew Parrott, PhD, of Baycrest Health Sciences, Toronto. “This adds to the growing body of evidence showing how various lifestyle factors may combine to increase or protect against vulnerability to Alzheimer’s disease.”

Cognitive training for the maintenance of brain health is a growing area of interest, particularly as it may offer a complement or alternative to drug therapies in delaying the onset of cognitive decline. At AAIC 2016, researchers presented 10-year results from the Advanced Cognitive Training for Independent and Vital Elderly (ACTIVE) study, which examined the impact of several types of brain training on cognitively healthy older adults (average age 73.6).

After 10 years, only the speed-of-processing training group showed a statistically significant impact on cognition. The researchers detected a 33 percent reduction in new cases of cognitive impairment or dementia in those assigned to the speed training group. Participants who did the booster sessions – those who participated in 11 or more sessions of the computerized training – showed a 48 percent reduction in news cases of cognitive decline or dementia. There was no significant difference in the other two training groups.

Participants in the speed-of-processing group were trained on a specific task designed to improve the speed and accuracy of visual attention. The user identifies an object (i.e., a truck) at the center of his/her gaze while at the same time identifying a target in the periphery (i.e., a car). As the user gets the answers correct, the speed of presentation becomes progressively briefer, while the targets become more similar. In the more difficult training tasks, the target in the periphery is obscured by distracting objects.

“We believe this is the first time a cognitive training intervention has been shown to protect against cognitive impairment or dementia in a large, randomized, controlled trial,” said University of South Florida associate professor Jerri Edwards, PhD. “Next, we’d like to get a better grasp on what exactly is the right amount of cognitive training to get the optimal benefits.”