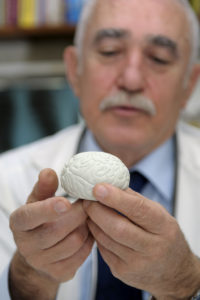 Among the 5.2 million Americans age 65 or older with Alzheimer’s disease, nearly two-thirds (3.3 million) are women. However, new data presented at the Alzheimer’s Association International Conference 2016 (AAIC 2016) in Toronto last month, suggests a high number of men are not accurately diagnosed during their lifetime. In addition, the investigators found that there may be a relationship between sex and the age of onset of Alzheimer’s.

Researchers from the Mayo Clinic in Jacksonville, Florida, queried the State of Florida brain bank for Alzheimer’s cases and identified 1,606 individuals ranging in age from 37 to 102. Demographic and clinical data were collected, including education, family history, age of onset, disease duration, cognitive test results, and presence of known Alzheimer’s risk genes.

Results showed that women with Alzheimer’s in the study had lower education and older age at death. Men in the study were younger at age of onset, had a shorter disease duration, and more commonly had an atypical clinical diagnosis (e.g., corticobasal degeneration, aphasia). The study also revealed a spike in the frequency of Alzheimer’s in men in their 60s; whereas the frequency of women with AD was overrepresented in their 70s, 80s and 90s.

A second study reported at AAIC 2016 – presented by a team from Keenan Research Centre for Biomedical Science, St. Michael’s Hospital, Toronto, Ontario, Canada – also focused on issues related to diagnosis and misdiagnosis of Alzheimer’s disease. The researchers looked at inconsistencies between clinical and neuropathological diagnoses in 1,073 people from the National Alzheimer’s Coordinating Center database. The correct clinical diagnosis of Alzheimer’s disease was made in 78.4 percent of cases, with equal rates of false negatives and false positives.

The term “mixed dementia” is most commonly applied when the hallmark brain changes of Alzheimer’s disease and vascular dementia coexist, but can also describe Alzheimer’s and coexisting pathology of other forms of dementia. These pathologies may interact in important ways to increase likelihood of clinically significant cognitive decline. Mixed dementia prevalence may also become more common with increasing age. No drugs are currently approved by the FDA to treat mixed dementia. Since some of the drugs approved to treat Alzheimer’s have shown a similar benefit in treating vascular dementia, there is reason to believe they may also be of help in mixed dementia, but more research is needed in this area.

Diagnostic errors can have important implications for patient treatment and outcome. The Alzheimer’s Association supports research that helps improve diagnosis of Alzheimer’s disease and other dementias. For example, the Association leading the Imaging Dementia””Evidence for Amyloid Scanning (IDEAS) Study. The four-year study, with an estimated budget of $100 million, will determine the clinical usefulness and value in diagnosing Alzheimer’s and other dementias of a brain positron emission tomography scan that detects a core feature of Alzheimer’s disease. IDEAS is led by the Alzheimer’s Association and managed by the American College of Radiology and American College of Radiology Imaging Network.