Perspective of a young caregiver

Alison Hunter and her sister, Emily, had to grow up fast when their mother developed Alzheimer’s.

A call from a concerned sister
In 2011, Alison was just about to graduate from college in Eugene, Oregon. Her sister, Emily, who was in high school in Monterey, reached out about their mom, Anne Marie.

Anne Marie, a teacher in her early 50s, had lost her summer job teaching at a camp. She blamed it on being stressed and tired, but Emily was concerned.

A move back home
Anne Marie and her husband, Kurt (who died of brain cancer in 2007), were both in the entertainment industry. Alison had initially planned to move to Los Angeles after graduation, to try and follow in her parents’ footsteps.

Instead, Alison moved home after graduation, so she could assess the situation. Her mother was missing appointments, forgetting to pick up Emily from school and forgetting names of her students.

There were the piles of paperwork and unpaid bills. Anne Marie’s work colleagues were also noticing issues. 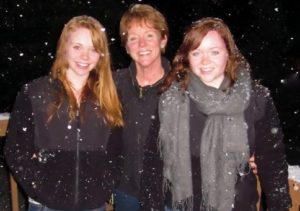 Anne Marie with her daughters, before her diagnosis

Difficulty getting a diagnosis
Anne Marie’s father and grandmother both had Alzheimer’s disease, so the family was familiar with the symptoms. But since Anne Marie was in her early 50s, doctors initially thought that her symptoms were related to menopause.

It took about a year and a half for Anne Marie to be diagnosed with younger-onset Alzheimer’s disease in 2012, at the age of 54.

A new set of responsibilities
After her diagnosis, Anne Marie, Alison and Emily attended weekly support groups for people who are in the early stage of Alzheimer’s and their care partners. Alzheimer’s Association staff helped the family figure out where to start. They connected the family with a lawyer to help them with legal planning. They helped Alison find a social worker to help navigate the paperwork required for Anne Marie to receive benefits such as Social Security Disability and Medicare.

As the oldest, Alison has taken on most of the responsibility. But Emily also had to grow up more quickly than most teenagers. During the first years after the diagnosis, Emily was still in high school and Alison was working full-time.

Growing up quickly
Alison has learned a lot in this journey. She navigated things that many of her peers have never had to think about. Helping a parent apply for disability, seek Medicare coverage and move into a care community are not experiences most people have while in their 20s.

Her mother’s young age also made things more complicated. They encountered many denials and had to submit appeals to make sure Anne Marie had the resources she needed.

Emily helped drive her mom to appointments and care for her while Alison was at work. Alison would come home at lunch to check on mom. She also has managed all of the paperwork and logistics of Anne Marie’s care.

Financing care
After Emily went to college, Anne Marie moved into a care facility. While still very involved in her mother’s care, Alison has made some adjustments.

Anne Marie had purchased long-term care insurance, which is helping. But the cost of her care is now double what the insurance pays. Alison sold a home that her mom owned and they are using those funds to help pay for care.

Reflections on caregiving
“At first, I wasn’t taking care of myself,” Alison admits. “When we moved Mom into the care community, I realized that I needed to focus on me.” Alison now enjoys time for physical activity, traveling with her husband, Beau, and volunteering with the Alzheimer’s Association. 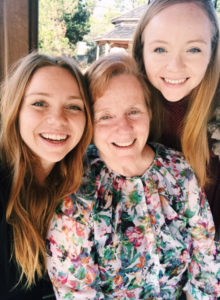 Alison has also had more time to reflect on her caregiving journey. “It has been stressful and hard road,” she shares. “I was watching friends develop in their careers. There were things they took for granted, like having a parent there to support them if they struggled.” It was difficult, knowing that her mother would no longer be able to provide that support.

Alison misses Anne Marie’s bubbly personality. “She was the best mom anyone could have asked for,” says Alison. “She’s still happy, but she’s not the mom we knew. I can’t go to her for advice.”

With all that she has been through, Alison feels good knowing that she is giving back to her mom.

Impact of caregiving on her own career and finances
Caring for her mother made it difficult for Alison to follow the career path that her peers were taking. Alison has adjusted her career goals and continued to live in the Monterey area. Emily graduated from college and is living in Los Angeles. She is currently working for a producer.

Alison had to reduce her time or leave jobs due to caregiving responsibilities. She was not able to put as many funds towards retirement as others her age.

Given that three generations of her family have developed Alzheimer’s, Alison, now 28, is worried. She worries about whether this time as a caregiver will impact her own financial health in the future, especially if she were to develop Alzheimer’s.

Tips for other caregivers
Alison encourages other caregivers to take steps to care for themselves. “It’s hard to see the person change so much,” said Alison. “Take care of yourself. I took too long. It affected my own health.”

She provided other great tips:

Advice on how to help a caregiver
Alison has had people offer support. She admits that it wasn’t always easy for her to turn those offers into helpful tasks.

If you want to support a caregiver, Alison encourages you to be specific in your offers of support. Don’t just say, “let me know if I can help.” Make concrete offers, such as:

Becoming an advocate
A few years ago, Alison looked for ways to get involved. She joined the Alzheimer’s Association advocacy team for Congressman Panetta.

She has visited with the Congressman’s office locally. In 2016, she attended the Advocacy Forum in Washington, D.C. Last month, she and Emily both attended the Forum. Shortly after the Forum, Congressman Panetta co-sponsored the BOLD for Alzheimer’s Act, one of the bills they discussed in their meeting.

Alison was impressed by the number of young advocates at this year’s Advocacy Forum. Over 170 advocates under age 35 attended.

Since a lot of the congressional staffers are also in their 20s or early 30s, hearing from Alison and Emily can make quite an impact. The sisters found that not many people have heard a story like theirs. 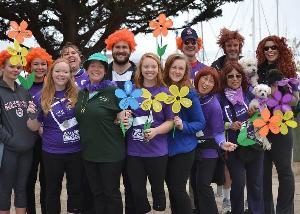 Walking to End Alzheimer’s
Alison, her family and friends have participated in the Monterey Walk to End Alzheimer’s since 2011. Since Anne Marie and her daughters all have red hair, they named their team The Ginger Snaps.

While Anne Marie has walked in the past, Alison doesn’t think she’ll be able to walk this year. But Alison and many others will walk for Anne Marie.

Alison enjoys seeing everyone come together for a common goal. She feels the support for her family and the millions of others who are affected.

You can support The Ginger Snaps or participate in a Walk to End Alzheimer’s event near you.