Edward Jones associates volunteer in their communities to #ENDALZ

The Alzheimer’s Association® is fortunate to have support from many companies across the country. The largest is our strategic alliance with Edward Jones, a fortune 500 financial-services firm.

In our chapter, we are fortunate to have many Edward Jones associates who have stepped up to lead Walk to End Alzheimer’s® teams. Several are also participating on Walk planning committees. Three shared their stories and Walk tips with us.

William Palmer III, Financial Advisor, Reno, Nevada
William was very aware of the impact Alzheimer’s and other dementias have on a family. His grandfather, William Henry Palmer I, had dementia.

His grandmother, Selma Jockisch, is living with Alzheimer’s disease and her husband Heinz also has dementia. Selma and Heinz were World War II survivors, who live in Salt Lake City.

There are currently 60 family members, including William, who provide care to Selma and Heinz. They each take turns helping out for a few days.

William was familiar with the Alzheimer’s Association as a national organization. He had participated in the Walk to End Alzheimer’s in Salt Lake City, before he moved to Reno. 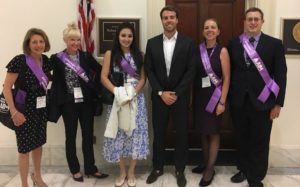 William, on right, at Advocacy Forum

When Edward Jones became the National Presenting Sponsor of the Walk to End Alzheimer’s, they encouraged associates to reach out to their local chapters. William hadn’t known that there was an Alzheimer’s Association office in Reno.

He went to the office and asked how he could help. William’s volunteer involvement has grown over time. Currently William:

William enjoys educating others about Alzheimer’s. He has also appreciated the opportunity to present on how to protect yourself from fraud and scams.

William’s personal caregiving experience helped him realize that many families have not received sufficient education about living with Alzheimer’s or caring for someone with a cognitive impairment. William has been surprised by how many people don’t know about the Alzheimer’s Association and the services they offer in the community.

Engaging other Edward Jones associates in the Walk
William coordinates the Walk activities for the 50+ offices in the northern Nevada region. He has been encouraging associates from other offices to participate in the Walk to End Alzheimer’s.

Some offices create their own team; others join an existing Edward Jones team. William shared that everyone gets involved in some way, whether it’s walking, inviting others to participate or donating.

In 2017, William had 211 team members, who raised almost $6,000 for the Alzheimer’s Association. While he enjoyed having such a large team, he is also happy when branch offices form their own teams.

When asked why people should get involved, William shared: “Drinking contaminated water used to kill people in the United States. Getting polio or smallpox could be a death sentence. Alzheimer’s disease and cancer are our new threats. We fought these other diseases. Now we fight Alzheimer’s and cancer.”

Walk day impressions
William gets to the Walk site at 4 a.m. to help set up. He has a team of volunteers who help him. It’s a busy day for William.

He loves seeing everything come together on Walk day. “I get to see the entire marina full of people in purple. It fills me with awe,” says William. “By noon I’m exhausted and I never regret it.”

Personal impact of the partnership
William shared why he appreciates the commitment Edward Jones has made to the Alzheimer’s Association. “I want to help our clients live the lives they want to live. This partnership has put more of a focus in my heart on quality of life for our clients.”

Shari Boulas, Senior Branch Office Administrator, Turlock, CA
Nobody in Shari Boulas’ family has been affected by Alzheimer’s. Her involvement with the Walk to End Alzheimer’s has opened her eyes to the impact the disease is having on her clients, neighbors and community.

Getting her feet wet
Shari has worked for Edward Jones since 2009. She is a Senior Branch Office Administrator in Turlock.

In 2016, when Edward Jones first joined as the National Presenting Sponsor of Walk to End Alzheimer’s , Shari joined a team and raised funds for the Walk in Modesto. She was out of town on the day of the Walk.

After speaking with the Alzheimer’s Association Walk Manager, Shari joined the committee. She jumped in and offered to do whatever they needed.

Discovering the impact on her community 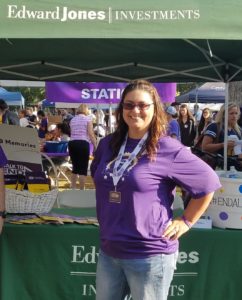 Shari helped to get the word out in Turlock about the Walk. After work one day, she visited local businesses and asked them to put out materials about the Modesto Walk to End Alzheimer’s.

The vast majority of people Shari spoke with at the local businesses shared stories of people they knew with Alzheimer’s or other forms of dementia. Speaking with others helped Shari realize what a huge impact the disease is having on her community. It made her want to get more involved.

Stepping into a leadership role
This year, Shari is chair of the team retention subcommittee. She is helping to bring back past teams to participate in this year’s Walk.

“I’ve never done anything like this before,” said Shari. “Cheryl Shrock from the Alzheimer’s Association gives me tips on what can work. I led a texting campaign to previous team captains that had good results in just two days.”

Pride in her employer
When Shari was growing up, she used to visit her aunt, who worked for Edward Jones. Her aunt’s boss once helped Shari out with a high school project. It made an impact on Shari.

“Way back then, I knew that Edward Jones was special,” remembers Shari. “Reading the quotes about why we got involved with the Alzheimer’s Association has opened my eyes. It has made me proud to work for a firm that truly, genuinely cares about our clients.”

Why get involved
Shari has enjoyed being a part of the planning committee. She has gotten to know more of her community and has bonded with fellow committee members. They support each other in meeting their goals.

For anyone who might be interested in joining a Walk planning committee, Shari encourages you to meet the committee. “I went to a few meetings before I made a commitment. I listened to what they do and how they do it. It has changed my way of thinking. I don’t want anyone I love to be affected by Alzheimer’s. I need to do my part and help others make a difference.”

An email invitation
An Edward Jones associate who was involved with the Silicon Valley Walk asked if anyone would be interested in helping with the San Francisco Walk. Matthew, a Financial Advisor for six years, has seen how Alzheimer’s impacts not only his family but his clients. He wanted to get involved with a cause that he was passionate about.

Matthew’s favorite part of the Walk was seeing everybody come together for a good cause. He enjoyed the impact Edward Jones was able to make. It motivated him to do even more this year.

There are four Walk to End Alzheimer’s events in the geographic territory Matthew is working in: Monterey, San Francisco, Silicon Valley and Santa Cruz. Other Edward Jones associates are serving as sub-coordinators for each of those Walks.

Matthew has been encouraging his colleagues to engage in a friendly competition to see which group can raise the most funds. “It’s a perfect way to spend a day with your colleagues, families, friends and clients,” says Matthew. “You can come together for a movement that likely has impacted somebody you know.”

Matthew shared some of the things he tells others, to encourage them to participate: 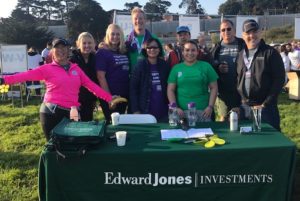 “Every single person I’ve come in contact with from the Alzheimer’s Association has been energetic, helpful, fun and understanding,” shared Matthew. “When you’re working with people like that, it inspires you to want to do better.”

A life-changing experience
Edward Jones’ involvement with the Alzheimer’s Association helped Matthew bridge his personal and professional experiences. His family has felt the impact of Alzheimer’s.

Matthew has also had clients develop Alzheimer’s or other dementias. He has built relationships with the children of his clients, as they had to step in as caregivers and help manage their parents’ finances.

Matthew shared that the strategic alliance has changed his life. “I had my own personal experience, but I didn’t put my experience with what I was doing for a living until Edward Jones and the Alzheimer’s Association came together. I wouldn’t want my clients to go through what my family experienced. I want to help find a cure.”

A national commitment
Edward Jones signed on as the first-ever National Presenting Sponsor of Walk to End Alzheimer’s in 2016. In 2017, Edward Jones was the top National Team for the Walk, raising more than $2.31 million through 2,762 teams and 18,559 participants.

This year, Edward Jones is committed to growing their support. Their goal is to raise $4 million through the Walk. This will be done through the efforts of Edward Jones associates creating Walk teams, and recruiting clients, friends and family to join them.

John Beuerlein, Principal with Edward Jones, echoed the sentiments of William, Shari and Matthew, about the impact of this partnership. “The Alzheimer’s Association has given our firm, for the first time, a way to demonstrate our ‘corporate heart’ on a national stage which has measurably raised the loyalty of our clients, strengthened our firm’s culture and positioned our firm as a great place to work.”

In order to bring more awareness to the Walk to End Alzheimer’s Edward Jones associates are taking place in a Walk Across America. Associates are walking from California and Florida to St Louis, where Edward Jones’ Home Office is located. The walkers will meet at the St. Louis Walk to End Alzheimer’s on October 28. You can learn more and follow their progress as they Walk Across America.

You can see their fundraising progress or join an Edward Jones team participating in the Walk to End Alzheimer’s.