During her senior year at Summerville High, Claire Caldera, of Sonora, had to complete a senior project. Inspired by her grandmother, Alice, who was diagnosed with Alzheimer’s disease about two years ago, Claire decided to hold a dinner and art auction fundraiser.

An important cause to her family 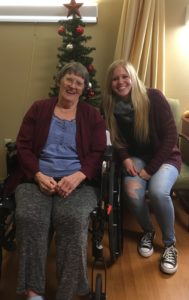 Claire with her grandmother

As a child, Claire used to spend time with her grandmother after school. Now, when she visits, Alice doesn’t know who Claire is.

Claire’s grandmother isn’t the only family member with Alzheimer’s. Alice’s sister, Barbara, died of Alzheimer’s. Claire’s Aunt Debbie has been living with younger-onset Alzheimer’s for over 12 years. Claire has also seen how Alzheimer’s affects caregivers, such as her father.

Coming up with the plan
Claire shared her idea with a family friend, who connected her with Alzheimer’s Association staff. This led Claire to sign up for the Modesto Walk to End Alzheimer’s.

The school record for funds raised during a senior project was $20,000. Claire set her own goal at $20,000, to see if she could beat the record. She thought that it would be a stretch to raise that much money.

In thinking about her fundraiser, Claire wanted to do something unique. Since her community has many amazing local artists, she decided to hold an art auction. The event also included a dinner and silent auction. 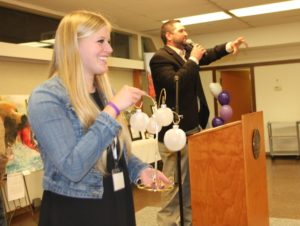 Claire with one of the auction pieces

The small community of Sonora really stepped up to support Claire. While she knew that her community is generous, Claire enjoyed seeing that “people were even more willing to donate than I ever thought they would be.”

Many local businesses signed on as sponsors, donated food and/or provided silent auction items. Local artists donated pieces for the live auction. Claire put up posters in the community and posted on social media to get the word out.

Over 200 people attended the fundraiser. Many heard about the event from friends and neighbors. Steven Barbieri, who is living with chronic traumatic encephalopathy (a form of dementia), shared his story at the dinner.

The fundraising grew from $33,000 at the event to $38,500 in the days following. People around the county and beyond heard about the event and reached out to Claire to contribute. Claire said that “it was a spectacular experience, receiving calls from people I had never met, who wanted to donate.”

Learning about the impact of Alzheimer’s
As part of her senior project, Claire had the opportunity to educate herself, her fellow students and the community. She learned more about Alzheimer’s disease and the work of the Alzheimer’s Association.

She researched the effects of Alzheimer’s, beyond just memory loss. Claire also witnessed the changes in her grandmother, as the disease progressed.

Tips for seeking support
Data from the Alzheimer’s Association helped Claire demonstrate the impact Alzheimer’s has on families and our economy. She also shared how Alzheimer’s had affected her own family.

For those who may not be sure how to ask for donations, Claire encourages you to educate others about Alzheimer’s. Once people understood how Alzheimer’s affects a family and the community, Claire said they were eager to contribute. She found this education to be the best way to motivate them.

In seeking donations, Claire was also surprised by how many people’s families had been impacted by Alzheimer’s. These individuals welcomed the opportunity to provide support. 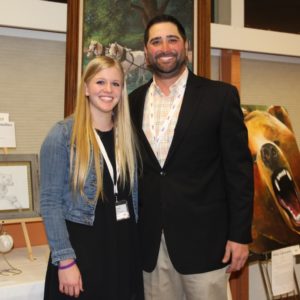 Making an impact
Claire’s team is currently one of the top five fundraising teams in the country for the Walk to End Alzheimer’s. Cheryl Schrock, Special Events Manager for the Modesto Walk, had this to say: “It was so inspiring to attend the event. Claire demonstrated that you’re never too young to make an impact and that one person can make a difference. We are so appreciative of Claire’s hard work in support of the Alzheimer’s Association.”

Claire wants her fundraising efforts to support discoveries in Alzheimer’s research and help local families who are affected by Alzheimer’s or other cognitive impairments.

Future plans
As part of her senior project, Claire shadowed professionals working in different parts of the health care sector. She plans to pursue a career in some aspect of the medical field.

Claire will be attending California Lutheran University in the fall, studying biology. While school starts in August, she hopes to return home to attend the Modesto Walk to End Alzheimer’s on September 8. We sure hope to see her at the Walk.

If you’d like to participate in the Walk to End Alzheimer’s, you can find the Walk nearest you and register today.