Chris Hannafan of Walnut Creek has been living with Alzheimer’s disease and posterior cortical atrophy (PCA) for two years. Chris and Debbie Katz, his partner of over 20 years, have found support and a new group of friends through the Alzheimer’s Association.

Early stage support groups
The Alzheimer’s Association offers weekly support groups for those living with Alzheimer’s and related cognitive impairments who are in the early stage of the disease. A concurrent group is available for their care partners.

Group members can talk about their experiences with others who can understand what they are feeling. “I don’t have a problem talking about what’s going on with me,” shared Chris. “My sense is that because I do that, it helps other people feel comfortable talking.”

Debbie, who is a marriage and family therapist, has also benefited greatly from participating in the care partner group. “As a therapist, I always say that groups are important. But actually being in my own group and experiencing it myself was different,” Debbie said. “It helps to have a place where you can say how you’re feeling.” Being part of the group helped Debbie realize how much she had been holding things in.

Let’s have dinner
In these groups, Chris and Debbie also found a new set of friends. Two years ago, one of the former group participants invited everyone to get together for a holiday dinner. They met at a local restaurant and had a great time. 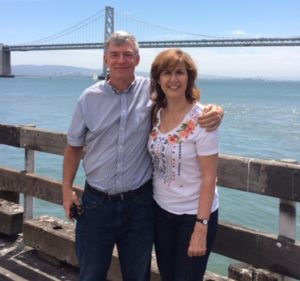 Later, Chris and Debbie thought it would be nice to have a get together for the group at Chris’ house. They invited current and former group members to attend.

The early stage support group schedule includes a two-week break after each eight-week session. The next time the group was about to have a break, someone else hosted a potluck.

This informal tradition of meeting during breaks has continued. Current and former members of the support groups attend.

Deepening their bonds with each other
Approximately 20-25 people usually attend. “The dinner I think about most was in the summer; we were sitting outside,” Chris shared. “There is something magical about it when you’re really connecting.”

As the disease progresses and individuals’ lives change, people transition out of the early stage support group. The dinners give group members the chance to meet in a relaxed setting, even after they stop attending the support groups.

“The dinner is a really great way for us to stay connected with the people who have left,” Debbie said. “A couple who moved to Palm Springs are coming up for this month’s dinner.”

Both Debbie and Chris also appreciate the opportunity to spend more time with the individuals who attend each other’s group. “At the dinners, I get to meet the partners of the people in my group,” said Chris. “It allows us to connect with them too.”

Sometimes those with Alzheimer’s and their care partners are reluctant to socialize. They may become more isolated. The dinners are particularly helpful for these individuals.

The dinners have expanded the members’ social circles. Sometimes people who have left the group meet current group attendees and create new friendships.

When Chris first started attending the support group, he asked an Alzheimer’s Association staff member what more he could do. She invited Chris to volunteer for the peer-to-peer program. 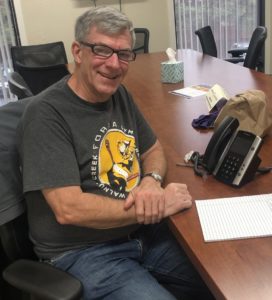 Every other week, Chris calls individuals living with dementia who are unable to attend a support group, due to distance or other circumstances. They talk about their experiences. “It’s magic,” Chris says of being in the peer-to-peer program.

Chris is grateful that he is able to be useful. He finds that he also benefits personally from helping others.

“Chris and all the peer to peer outreach volunteers are doing such important work,” said Vanessa Souza, Early Stage Program Coordinator. “They are able to reach people living with Alzheimer’s who otherwise wouldn’t have a way to connect with someone who really understands what they are going through. The peer to peer calls can be a first point of contact for people living with Alzheimer’s who aren’t able to come to our offices in person, as well as an ongoing source of support.”

Other ways to help
Chris is on a mission to support others who are living with Alzheimer’s or related disorders. Finding opportunities to be around other people helps him as well. “There are so many people out there who don’t have someone to talk to,” noted Chris.

Chris has shared his story with the media and with community groups. He recently joined the Board of Directors for the Northern California and Northern Nevada Chapter of the Alzheimer’s Association.

“I call it, welcome to the new world,” said Chris. “It means that I can create anything I want.”

Learn more about opportunities for support and engagement for those living with Alzheimer’s and related disorders online or by calling 800.272.3900.