An ongoing commitment to end Alzheimer’s in honor of Dad

Spa owner Vicky Patel of Saratoga, California, could easily converse with her father, Richard Sakers Sr., even after he was diagnosed with Alzheimer’s disease in 2003. Poppy, as he was known to his grandchildren, had a surprisingly clear memory at times.

“In 2014, we were talking about my house, a place he hadn’t seen since the summer of 2008,” says Vicky, one of Richard’s five children. “I was showing him photos of a room we completely remodeled, and he started telling me the layout of where things used to be. I was shocked that he could remember all of that, because it had been years since he had been there.”

Born in Pennsylvania and raised in Maryland, Richard joined the U.S. Air Force in 1947 and later lived in towns ranging from Fort Lauderdale, Florida, to Silver Lake, Kansas, working as a drywall contractor and refurbishing cars in his free time. Richard moved to Gainesville. Florida, in 1983, and upon retirement at age 75, enjoyed riding around the neighborhood in his golf cart and solving jigsaw puzzles.

The first signs
According to Vicky, her father’s symptoms were mild at first. He’d repeatedly ask the same questions or forget where he put something. He sometimes couldn’t recall that he’d brewed a pot of coffee before starting another. 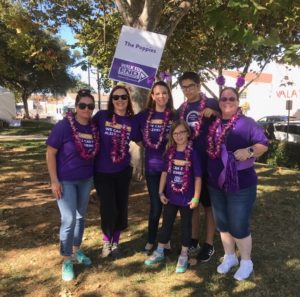 “But he was still there mentally and physically,” Vicky says. “There were many times that I wondered if he really did have Alzheimer’s, because he seemed normal other than the repeated questions.”

A slow progression
Richard began showing increased signs of decline in 2009. Even then, Vicky says, he never wandered or hurt himself or others. As time went on, however, it became clear that the disease was taking Its toll. The reality hit Vicky hard.

“To see the man he became, while also remembering the man he was, crushed my soul,” she says. “Alzheimer’s robbed him of knowing the names of his children, where he lived and the ability to have and follow conversations. There were some rare times when you’d see a flash of his personality, but they passed all too quickly.”

Why not me?
This experience motivated Vicky to generously support the Alzheimer’s cause in his honor, which she has done for a number of years. In November 2015, Vicky decided to do something special. She pledged to donate $1 million to the Alzheimer’s Association if the same amount was raised by Dec. 15. The matching gift challenge was a success to say the least “” it raised $6.4 million. Vicky’s gift of $1 million funded six individual research grants, and the matching funds supported care, support and research efforts. 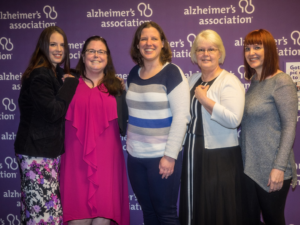 Vicky with family and friend at Memories in the Making Auction

Unfortunately, the timing was bittersweet: Richard died at age 85, shortly after Vicky made her pledge. She remains steadfast in her commitment to fuel science that might lead to breakthroughs.

“I’m all too aware of the need for more funding for Alzheimer’s research,” Vicky says. “If it’s not coming from the government, then it has to come from somewhere. Why not me? It’s as easy as that.”

An ongoing commitment
Vicky has continued her generous support of the Alzheimer’s Association since her father died. Since 2012, she has led The Poppies team at the Silicon Valley Walk to End Alzheimer’s with her teammates:

For the past four years, Vicky has been the top fundraiser for the Alzheimer’s Association Walk, out of over 526,000 participants nationwide. 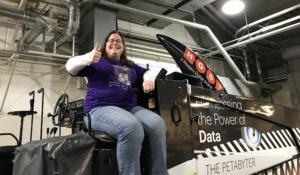 Vicky, riding the Zamboni at the Sharks game

In 2017, as the top fundraiser for the Silicon Valley Walk, Vicky had the opportunity to ride on the Zamboni during Alzheimer’s Awareness Night at the San Jose Sharks hockey game. At this year’s Walk, she was thrilled to watch her granddaughter, Evalyn, hold up the white flower during the opening ceremony, representing hope for the first survivor of Alzheimer’s disease. 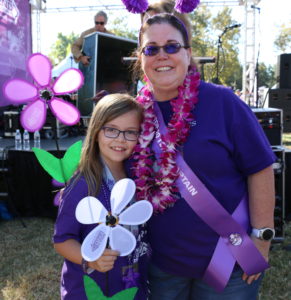 “My dad is my inspiration,” Vicky says. “He was aware of the donations I’d made. He knew about the Walk team named for him. His reaction to these things makes me want to give all that I have to help find a cure for this disease.”

Vicky’s story was originally shared in the Spring/Summer 2016 issue of the Alzheimer’s Association Aspire Philanthropy Magazine.