When Ria Rabun of Fairfield started volunteering for the Alzheimer’s Association, she didn’t think her family had been affected by Alzheimer’s. She later found out that she was wrong.

Through the partnership, Ria participated in the Walk to End Alzheimer’s. Then a friend from college, whose mother had Alzheimer’s, invited Ria to attend a meeting about Alzheimer’s advocacy.

Becoming an advocate
Alzheimer’s Association staff invited Ria to become an advocacy volunteer. “It doesn’t run in my family,” Ria thought, “but I have some time to give back.”

Ria is part of the advocacy team in Congressman John Garamendi’s district. She has been volunteering for about three years.

Something isn’t right
After Ria had started volunteering, her husband, Jim, mentioned some unusual behavior he’d noticed on a visit with Ria’s brother, Carl, who lived in Seattle. Several months later, Ria was planning for Carl to fly down for a visit. 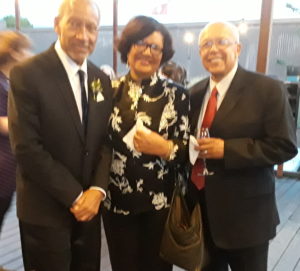 Carl’s son told Ria that he didn’t think Carl could travel on his own. He shared that Carl had been diagnosed with Alzheimer’s disease a couple of years earlier.

Ria learned from family that Carl had been sending donations to charities, thinking that he was paying bills. As the disease progressed, Carl also wandered away from the care community where he was living. Carl is now 71 years old and is living in a memory care community.

Sharing her story
As an advocate, Ria and fellow team members talk with Congressman Garamendi and his staff. They share stories of how constituents are affected by Alzheimer’s and other dementias.

Ria and other team members ask Congressman Garamendi to support legislation such as the BOLD Alzheimer’s Infrastructure Act, which was recently signed into law. They encourage him to support increases in federal Alzheimer’s research funding. 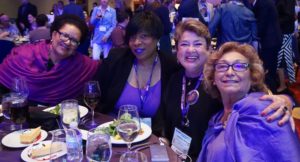 Ria with fellow advocates at Forum

While she only knew one other person who was attending, Ria appreciated how friendly and welcoming everyone was. She said that it was like going to a family reunion.

At the Forum, advocates learned about current policy priorities and got tips on holding an effective legislative visit. On the final day, teams met with legislators and staff on Capitol Hill. Ria found the visits to be very informative. 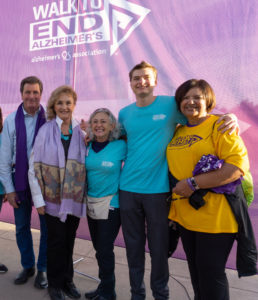 The Garamendis with Association staff and Ria

Sometimes, Ria is able to connect someone with programs and services offered by the Alzheimer’s Association. She has participated in senior forums that Congressman Garamendi has held throughout his district. “Some people are looking for help,” said Ria. “There’s always the first person in the family to be affected.”

Motivation to continue
When others learn about Ria’s volunteer work, they often tell her how Alzheimer’s has affected a friend or family member. Along with her own family’s story, these stories drive Ria to keep advocating and to encourage others to get involved.

Recently, someone at her gym shared their personal connection to Alzheimer’s. “The more we can get people to volunteer,” Ria shared, “the more people will learn that there isn’t any reason to feel shame or to hide the diagnosis.”

A small step that means a lot
Ria shared that she recently felt the impact of her efforts when she read that the BOLD Alzheimer’s Infrastructure Act had been signed into law. “It makes me feel that the little things we do make a difference,” Ria said. “I’m not doing much, but it works when advocates from across the country work together towards the same goal.” 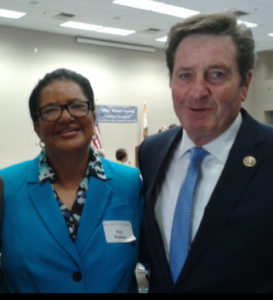 Ria expressed appreciation for the support she receives from Alzheimer’s Association staff. “It’s one of the easiest organizations to work with,” said Ria. “When I need help, I reach out to staff and they take care of it right away. The support I get as an advocate has been outstanding.”

While shy as a child, Ria has not been afraid to use her voice on behalf of Carl and others living with Alzheimer’s and related disorders. She encourages anyone who is interested to get involved.

All you need is a desire to help people and a passion for finding a cure for Alzheimer’s. As Ria has found, “it’s a small step that means a lot.”

Learn more about volunteering as an advocate. If you live in California, we welcome you to join us on February 5 in Sacramento, for California Advocacy Day. Registration is also open for the Advocacy Forum in Washington D.C., held March 31 – April 2. Nevada Advocacy Day will be held on April 16 in Carson City.