Arthur Murray expands their efforts to support the Alzheimer’s Association through The Longest Day.

Last year, we shared how chapter board member and dance student, Nancy Westcott, recruited local Arthur Murray studios to participate in The Longest Day. Through the leadership of studio owners, Chris and Daisey Lynam, in 2018 this dance partnership is going global.

A successful first year for Arthur Murray in The Longest Day
Chris’ Aunt Jeanine died from Alzheimer’s disease in 2017. As business owners, Daisey and Chris had been looking for a way to get more involved in supporting a nonprofit organization.

“We were ready to deploy more than just a check or an auction item,” Chris shared. “We wanted to do something and we wanted to do it full blast.”

The Longest Day is an event to raise funds and awareness to advance the care, support and research efforts of the Alzheimer’s Association. Between now and June 21st, the summer solstice, teams do something they love, for someone they love. They turn their hobbies and passions into fundraising opportunities. 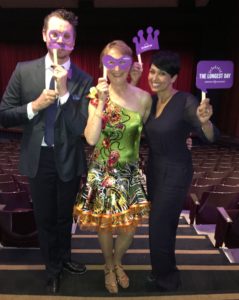 Chris, Nancy and Daisey on The Longest Day, 2017

Each studio (Hayward, Livermore, Redwood City, San Francisco and Walnut Creek) set up their own team. Chris and Daisey encouraged other studios to participate, which led to Arthur Murray teams throughout northern California, Seattle and Honolulu. Individual studios offered classes and held events to raise funds. One instructor in Redwood City volunteered his time to teach a hip hop class, with proceeds going to The Longest Day.

At a district showcase in San Jose, Chris and showcase judges offered to dance with individuals who made a donation to the Alzheimer’s Association. A flood of people, including Nancy, donated to get the chance to dance with one of their favorite judges. They raised over $11,000 from this event.

Many of the 270 Arthur Murray studios across the world will participate. Their overall fundraising goal this year is $100,000.

Nancy appreciates that The Longest Day “provides the opportunity for people to apply their talents and passions. Alzheimer’s research and support is such an important cause, for individuals and society.” This year she is serving as The Longest Day coach to the 15 Arthur Murray studios in our chapter.

Recently, several Arthur Murray instructors approached Nancy to ask if she had heard about the Global Team. They thanked her for helping to connect Arthur Murray and the 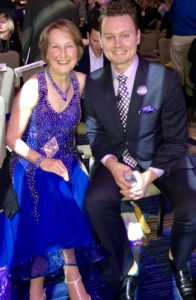 Getting started with the father-daughter dance
Nancy Westcott and Bart, her husband of 39 years, live in Palo Alto. They often passed by the Arthur Murray dance studio in Redwood City and discussed their desire to take dance lessons. But they didn’t step into the studio until their oldest daughter got married in 2008. Bart wanted to practice for the father-daughter dance.

Nancy was asked to be on the chapter finance committee in 2014 and to join the board in 2015. It was a natural fit, given her background. As a finance professional for medical device companies, Nancy understood the healthcare field. Her family has also been affected by Alzheimer’s disease. Ernie, Nancy’s brother-in-law, was diagnosed with younger-onset Alzheimer’s nine years ago, at the age of 61.

Having worked in the corporate world for 35 years, Nancy has experience with a variety of companies. “I am thrilled to be involved with such a well-run organization that is so dedicated to making a difference,” she says. Being on the Board “is some of the most rewarding work I’ve done.”

Unexpected benefits of dancing
Nancy didn’t start ballroom dancing to improve her health. But she has come to appreciate the benefits. It’s fun exercise. It helps her stay active. It has improved her strength and balance. 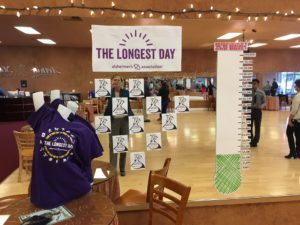 Nancy loves hearing and learning different styles of music, through the styles of dance. The longer Nancy and Bart have been practicing, the more fun they have. “It’s a ball,” says Nancy.

An unexpected benefit has come from the social aspect of dance. Nancy and Bart have found the dance community to be very welcoming, warm and energetic. People encourage and support each other. They have attended dinners and other events held by the studios.

Several shared stories about how their families have been impacted by Alzheimer’s or other dementias. Nancy felt that the dance community would eagerly support The Longest Day.

Research on dancing and brain health
Physical activity. Cognitive activity. Social engagement. Healthy diet. These are the habits doctors and scientists recommend to maintain or possibly improve brain health as we age. Ballroom dancing includes three of those habits.

Nancy shared the health and quality of life benefits she gets from dancing. There is a growing body of research related to the benefits of physical activity for those wishing to maintain their brain health as they age. Recent research is also showing benefits for those living with Alzheimer’s and other cognitive impairments. Some interventions are specifically looking at the benefits of dancing.

One study published in the New England Journal of Medicine found that dancing, reading, playing board games or playing musical instruments were associated with a lower risk of dementia.

A small study published last year in Frontiers in Human Neuroscience looked at the effects of dancing vs. fitness training on hippocampal volume and balance. The hippocampus, an area of the brain important to creating new memories, is known to change as we age. Shrinkage in the hippocampus is often found in people with Alzheimer’s.

You can join or support one of the Arthur Murray teams as they raise funds and awareness of Alzheimer’s.

Interested in turning your hobby or passion into a fundraiser for The Longest Day? Visit alz.org/TLD or contact Steven Krzanowski at skrzanowski@alz.org.