Why I Walk: Mattie Ruth Harris

Mattie Ruth Harris has been participating in the Sacramento Walk to End Alzheimer’s since 2006. She leads Team Ruth Harris, in honor of her husband, Al, who is living with Alzheimer’s. In October, Al and Mattie Ruth will have been married 60 years.

What did you first notice about Al’s health that concerned you?
I noticed that Al wasn’t remembering things exactly the way they had happened. He’d get upset if I corrected him.

One day, he pointed to his head and said, “I think something is wrong up here. Do you think the doctor can fix it?” That’s when we went in for testing

He passed some tests with flying colors. But after completing all of the tests, the doctor diagnosed Al with mild cognitive impairment.

What has your caregiving journey been like?
At first, I cared for Al at home. In the beginning, we continued to golf and travel. We had a goal to golf in all 50 states. We completed that goal.

In 2007, the doctor updated Al’s diagnosis to Alzheimer’s disease. 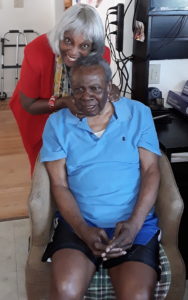 It was such a task trying to keep things together. When I thought about where Al used to be and tried to make it that way again, it just didn’t work.

I had to realize that the husband I was used to, I no longer had. It was a sobering thought. I have faith and believe that God has directed my path.

We tried to take a train trip to Atlanta in 2008. We got as far as Colorado before Al started to have problems.

He didn’t know where he was. He tried to go into other people’s train cabins. He accused me of having stolen him from his wife.

We had to return home early. When we got back to Sacramento, he did better for awhile.

Then Al started to become aggressive. I was able to find an adult day program for him to attend, which helped us both. 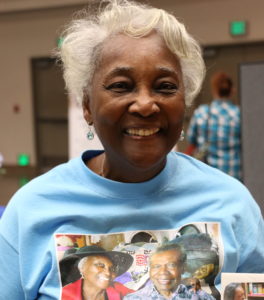 I tried to avail myself to whatever information I could get that was going to help me and help make life easier for Al.

Attending the education and support programs helped. It opened my mind.

It helped me prepare for what could happen. I wouldn’t be caught by surprise. It has kept me going, along with my faith.

What were some of the most helpful things you learned?
I learned how my tone of voice and what I say affects Al. For example, I had to stop saying things such as “Stop it. No. Don’t do it. You’re wrong.” I had been saying all of those things.

Now I share with other caregivers, “The person with Alzheimer’s is never wrong. What you see is the illness, not the person you love. They can’t help it, no matter how much we try to bring them back to our reality. We can go over and join them in the reality where they are.”

I also tell people, “Don’t feel guilty. You don’t have any control over what happened. You can’t fix it. Do the best you can do with both of your lives. You can feel regret, but don’t feel guilt. It can kill you.”

What do you do to care for yourself?
I continue to travel. I kept playing golf until 2 years ago, when I injured my rotator cuff.

I have a schedule. Tuesday through Friday I do my volunteer work. Saturday through Monday are for me to do whatever I want to do.

I visit Al twice a week. If I’m in the area where he lives, I’ll stop to see him. I don’t allow Alzheimer’s and caregiving to consume my life.

I volunteer to support other caregivers. I also share information in the community, wherever I go.

When I visit my sister-in-law, Christine, in Atlanta, she arranges a group at her church and I speak about Alzheimer’s.

Who participates in the Walk to End Alzheimer’s with you?
Family and friends join me. In the early years, Al participated in the Walk. Eventually, it became too confusing for him and he had a hard time with the crowds. 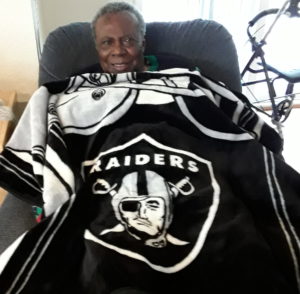 Al with his Raiders blanket

My daughter, Tanya, has walked with me. This year will be the third time that Al’s sister, Christine, is coming from Atlanta to attend the Sacramento Walk.

You’ve raised almost $2,000 this year. How do you raise funds?
I send letters to everybody I know. I vary the content of the letters, depending on whether the recipients are past supporters or someone who hasn’t donated before.

Sometimes one of my past supporters will ask when I’m going to send my donation letter. They wait for it each year.

It’s also important to bring in new people. I checked my email last night and a friend from Southern California had donated $100.

I update the letter every year. This year, I wrote that we’ve come a long way since we’ve started, even though there isn’t a cure yet.

I tell people that I’m not walking for my husband. I’m walking for their children and grandchildren.

If I have questions or need help with my Walk fundraising, I reach out to the Alzheimer’s Association staff in Sacramento. They are always willing to assist me with whatever I need.

Describe the atmosphere on Walk day.
It’s exciting to be among people who are so upbeat, even though I know what we’re all going through. I get to talk to different people every year. The movement is growing.

The negatives go out the window. You see so many positive people. I also love the exercise.

What gives you hope?
I went to Ft. Lauderdale a few years ago to an international Alzheimer’s research conference. It was very encouraging to hear researchers from all over the world talk about what they are doing.

One of the researchers shared, “It’s not about who gets there first. Let’s get there together and share what we have with each other.”

They are going to find a way to prevent, treat or cure Alzheimer’s. I’m confident that it’s going to happen. When it will happen, I don’t know.

What do you hope that your Walk participation will accomplish?
The Walk to End Alzheimer’s is a crucial part of my life now. I’m doing something, rather than just sitting at home, hoping for a cure. I try to help move this process along. I look forward to the Walk.

I do believe there is a cure to be found. It’s going to take time and money. While I’m alive, at my 80 plus years, I want to be able to do what I can do. That’s why I walk.