On a Personal Note”¦(Dr. Diane Woodruff) 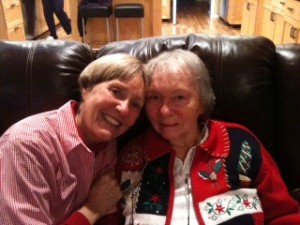 Dr. Diane Woodruff and her mother

Dr. Diane Woodruff cares for her mother, who was diagnosed with Alzheimer’s disease approximately four years ago. She regularly attends two different caregiver support groups sponsored by the Alzheimer’s Association.

“They have helped me deal with all kinds of practical issues like how to stop mom from driving, how to move mom out of her home in Santa Cruz to Sacramento, how to find a good place for her to stay, how find a doctor and dentist that are sensitive to Alzheimer’s patients,” she said. “They continue to give me great advice and moral support every step along the way; they have helped me through my darkest moments.”

One of the groups she attends is led by Frances Kakugawa, an award winning poet and writer who cared for her own mother with Alzheimer’s. Frances encourages her group to journal and write poetry to deal with the many feelings that come up when serving as a caregiver to a loved one with Alzheimer’s. Diane had never written poetry before but was encouraged by Frances who says that she “especially enjoys working with people who claim writing has been limited to their grocery lists.”

Following is a poem that Diane wrote as part of her experience in the support group with Frances after having attended a local Alzheimer’s Association event:

HOPE: Ode to Dr. Owen Carmichael and all the Alzheimer’s researchers
By Dr. Diane Woodruff June 21, 2012

The UC Davis researcher rose to speak about the latest research to find a cure
His credentials revealed that he was the best and brightest in his field
With bright eyes flashing, he explained what the researchers were doing
It was exciting to hear about the many angles of attack on the Alzheimer’s monster
He was so smart, so articulate and quietly passionate about his work
He explained complex scientific concepts in a way we could all understand
He said “some people think researchers are Dr. Spock-like cerebral nerds who don’t care”
“Not true” he said
“Many of us have relatives and friends who have had Alzheimer’s”
“We too have seen firsthand the devastating effects of this disease in our own families”
“We are committed to finding a cure”
“We care”
“We are working hard”
Best of all, he said: “We are hopeful”
I believed him
Now I am hopeful too.
Thank you Dr. Carmichael
Thank you to all of the researchers working to find a cure
Thank you Alzheimer’s Association for sponsoring the research
Together we can make a difference
Maybe not for my mom
Maybe not for me
But just maybe my grandchildren and/or my great-grandchildren
Will know Alzheimer’s only as a disease of the past
I am hopeful