Speaking out gives purpose to woman living with dementia

Even as her dementia with Lewy Bodies progresses, Cynthia Guzman continues to share her story.

“I’m going there to die,” is what Cynthia Guzman thought when she moved into the retirement community in Napa. Connecting with the Alzheimer’s Association has helped Cynthia stay engaged and find her purpose.

A birthday diagnosis
Cynthia received her diagnosis of Alzheimer’s disease in 2011, on her 63rd birthday. In 2015 she joined a diagnostic research study. Based on the results, her neurologist changed her diagnosis to dementia with Lewy bodies.

Meeting others with dementia
Cynthia attended a support group for people living with dementia. All in the group are in the early stage. She was excited to attend the group and meet others who were also living with the disease. She said it was very helpful and the facilitator was wonderful.

Doctor’s orders to get involved 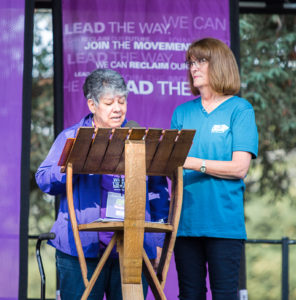 Cynthia, speaking at Walk to End Alzheimer’s in Napa

“Once I became engaged with the Alzheimer’s Association,” Cynthia says, “it gave me a purpose in life.” She speaks at events and shares her story with legislators. Cynthia tells people that her involvement began due to “doctor’s orders.”

Cynthia has spoken at many events in the North Bay, organized by the Alzheimer’s Association. She has shared her story at:
· Walk to End Alzheimer’s
· Education Conferences
· Advocacy Day in Sacramento
· Advocacy Forum in Washington, DC

In 2013, Cynthia served on a national Early Stage Advisory Group. This group provides feedback on services, raises awareness and advocates with legislators. This past year, she also participated in a bilingual TweetChat with the Alzheimer’s Association, FDA Office of Minority Health and the National Hispanic Council on Aging.

A year of changes
The past year was hard for Cynthia. She had pain from a fall. But she had a hard time identifying the location of the pain. After a long recovery, she’s happy to be feeling better.

Cynthia and her family have noticed changes in her symptoms. She sleeps more, but enjoys that she doesn’t have to follow a schedule. She has more difficulty with reading.

Besides her volunteer activities, Cynthia enjoys frequent walks. She spends time with friends. She visits her sons. She still travels. “It takes a little bit more work,” Cynthia says, “but I still get to go places.” She appreciates help from her family and airline programs that support her when she travels. 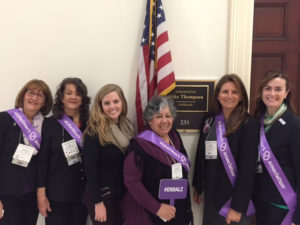 Cynthia, with team at Advocacy Forum

Sometimes Cynthia thinks that she will stop public speaking. Then Alzheimer’s Association staff invite her to share her story at an event.

Cynthia jokes that she has come back from retirement more times than Cher. In June, Cynthia plans to attend the Alzheimer’s Association Advocacy Forum in Washington, DC.

Build your support community
Cynthia’s advice to others living with Alzheimer’s or other dementias is to find education and support programs. The get involved. “There’s a community out there of people who can help.”

The Alzheimer’s Association is here to help Cynthia and others living with dementia. We offer education and support services to people with cognitive impairments and their care partners. We also have volunteer opportunities and ways for you to share your story. To learn more, call 800.272.3900 or visit alz.org. 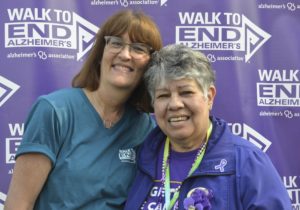