John has become very fearful of riding in the car. Part of the problem is that somehow he believes that he is driving the car. Granted he’s seated in the front looking out through the windshield, but as I have pointed out to him over and over he is in the passenger seat.

Nonetheless, it doesn’t stop him from believing that he can control the car with his feet or by bunching up his pant leg and twisting it in the direction he wants the car to turn. 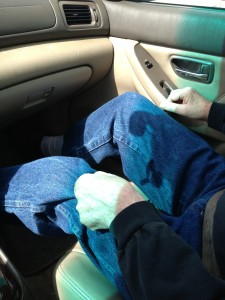 John trying to steer the car using his pant leg.

Sounds funny as I write this, but it is by turns terrifying, sad, frustrating and infuriating. This behavior began last September. I was driving home from an outing and John became hysterical: Truly scared out of his wits. I pulled over to find out what had happened and he started to lecture me about my driving. I was going too fast, passing too close to parked cars, not paying attention to name a few of the high points.

At first I reacted with surprise, but as he went on and on, I got angry. How dare he tell me how to drive! I had driven him around (his choice) for years and not a peep, but now that he can’t remember how to get home, he’s going to lecture me about my driving habits? I don’t remember much about the drive home except that it involved a lot of yelling.

After letting off some steam at my support group, I decided to try other tactics. I was returning to work after a three-month medical leave and would have to drive John to day-care several times a week. I didn’t want to start the mornings screaming at him or vice versa. And he was still in a clinical trial in San Francisco; how was I going to get him there and back?

So I tried turning up the radio to drown out his pleas for me to slow down. I yelled back. I ignored him. I put him in the back seat. Finally, I asked him why he was so terrified. He said it was because he didn’t want to die. I said that’s great because I’m not ready to die either. It was during that conversation I discovered John thought that he was the driver. Since the car didn’t do what he wanted it to, in his mind, he was the driver of an out of control car. He was filled with dread every single time he had to go for a ride.

To prep him for what was to come, as I drove down the road I told him every single move I was going to make: Every single move. That helped some. Drove me bonkers, but we were able to get from here to there without screaming. Or crying.

I spoke to one of his doctors who suggested Valium. John had taken it a few times to help get through one of the many MRIs he had to have. I took the prescription, but didn’t fill it for several weeks. It was when we were planning a long weekend to visit an elderly aunt in Wyoming that I gave in and got them.

Good thing, because that drive from Denver to Cheyenne was horrible. I had expected the plane ride to be the kicker, but John loved looking out the window. No it was the long, barren, two lane highway that did us in. Actually it was the wind.

I was clever enough to upgrade to an SUV when I heard that the winds were so strong there was talk of closing the highway between Cheyenne and Nebraska. What I didn’t factor in was nearly a hundred miles with big, long haul trucks and huge tumbleweeds sharing the road with us.

I’ll admit, I didn’t like the way the trucks and their trailers were swaying as we passed, but it was the tumbleweeds that randomly blew across the road that scared John. I knew that they were just dried up debris and swerving to miss them would be more dangerous than driving into them. But to John they were as solid as a car and I was playing a game chicken with them.

After blowing through the first two, I thought he was going to have a heart attack. So I pulled into a truck stop, gave him half a pill and put him in the back seat. He calmed down some and I was able to drive us the remaining 50 miles to our destination.

Our visit with the family was blissfully uneventful. We didn’t drive much and when we did get into a car I made sure to have someone else drive so that we could sit in the back and hold hands. I would love to say that the return drive from Cheyenne to Denver was smooth sailing, but it wasn’t. We made it to the same truck stop before I had to give him a Valium. Once we got home, some drives were good, others not so much, a few were really bad.

Right after Christmas we were going to the doctor’s office to fill out some paperwork. I was stopped in the turn lane to get on the freeway; before the light turned green John unhooked his seat belt and jumped out of the car. He ran across two lanes of traffic to the other side of the over pass and began walking in the opposite direction. The desire to let him go lasted a nanosecond before panic set in and I reached for my phone to call 911.

As I made a U-turn I caught a glimpse of John on the other side of the street. I parked the car and walked towards him. We stood holding each other and crying for a bit, but eventually I had to get him into the car to get us home. I think what happened scared both of us enough to be more careful about how we behaved when we were in the car. After that, I made sure that child locks were engaged at all times.

A couple of weeks ago we attended a house warming at our daughter’s house. Another hundred-mile drive but this time we made stops, brought food and drinks, and I acted as his tour guide. It was the ride home when he was tired and cranky that forced me to once again place him in the back seat and give him a pill.

I can’t stop working, so he must go to daycare. I wish there was someplace closer to home so that the ride was shorter, but there isn’t.