Why I Walk: Kelli’s Story 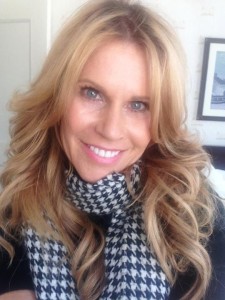 Kelli was diagnosed with Frontotemporal dementia at the young age of 48. Despite her diagnosis she is determined to fight back and will be participating in this year’s Walk to End Alzheimer’s in Petaluma!

Imagine being in my situation: I’m in the prime of my life, a young mother and grandmother, engaged to a man I adore. Living a full, fun and active life – a life so good it should be illegal. Suddenly, my world has flipped completely upside-down in the past year.

This is my true story. I’ve been characterized as a dynamic, loving woman who is known for being ridiculously candid and widely respected, a woman who has enjoyed an extraordinary life as an extremely productive entrepreneur in the salon industry for over 25 years. I am a woman who experienced a horrific “Stephen King” type of childhood and then transformed my experiences into a life of purpose, a life filled performing unlimited hours of volunteer service throughout my community. What would happen was unimaginable “¦

My name is Kelli McGowan. I live in Marin County, California. I am 50 years old. I have dementia.

Dementia struck during my third year of training to be a Pilates instructor. I was simultaneously very blessed with a great clientele as a stylist. I taught, hosted and produced events and classes as a leader in “A Course In Miracles.” I simply adored my granddaughter from the moment of her birth. I loved night life, shows, hiking and spending time with family. I lived to travel, volunteer, coach and assist others. I was very athletic, health conscious and in great shape. It seemed like life could not have been better.

Then approximately two years ago, I suddenly started to forget things and to get confused in normal conversations. I was found to be brushing my teeth two times in a row. There were embarrassing things at first. It became more dramatic in a short time as we noticed dangerous behavioral changes. I was alarmed at my inability to write. It was clear my cognition was vacant. My executive function and sequencing was all tangled or jumbled. Normal tasks and planning things became impossible. My body changed seemingly overnight; I became weak and clumsy. I was notably forgetful in a way that is disabling, embarrassing and humiliating. I could no longer pretend, deny or cover up what was happening. My family and close friends knew there was something seriously wrong.

In November 2012, I was diagnosed with Frontal Temporal Dementia. My neurologist told me to stop working.

My family is having a really hard time dealing with the progression of the disease and the changes in my personality. However, we try to laugh and make the best of it. My daughter took over my clients at the salon. Friends as well as family are helpful. I need assistance several times a day.

Many of my friends, however, won’t admit anything is wrong. If you were to just meet me, you most likely would not know the extent of how changed I am. I have good days and bad days. I stay home when it is necessary. I had always been extroverted; of late this is not so. The horror of living with a demented brain is beyond words. I have gone from being fully independent and passionate about working and living, to struggling in my own home. It is frustrating and downright brutal. I can no longer recall important information or simply do my laundry.

In addition to being advised by my neurologist to stop working, I am also dealing with having to go to trial to be granted disability. I am young and do not look sick or disabled. I have been denied disability three times.

As I educate myself about this silent disease, I have found that the facts about Alzheimer’s and other dementias are shocking, raw and discouraging.

Alzheimer’s is a silent disease that will break the nation. It is an escalating crisis.

I am launching a campaign to break the stigma of dementia, Alzheimer’s and related diseases. I am on a path to create an awareness of the impact that this disease will have in the next few years – this disease that could bankrupt America. I want to bring attention to the fact that the US legislators are not moving quickly enough to combat this silent killer and to create more awareness of the National Plan to Address Alzheimer’s Disease (the HOPE Act). I hope you will join me; I urge you to lend your voice, your actions, your contributions to face this crisis head on.

I am willing to speak for as long as I can.

Join the Walk to End Alzheimer’s