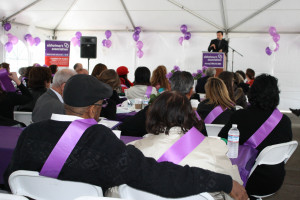 The normally drab halls of the California State Capitol were sparkling with color on March 6 as 160 Californians, clad in bright purple sashes, descended on Sacramento for Alzheimer’s Advocacy Day 2013.

As family members and individuals affected with Alzheimer’s disease, the volunteer advocates met with elected representatives and key staffers to share the impact the disease has had on them, and advocate for policies to help the many Californians confronted with the disease.

Alzheimer’s Advocacy Day, an annual event in California, is an opportunity to connect with legislators on a personal level, and to educate them about the realities of Alzheimer’s and what the legislature can do to improve life for the nearly 600,000 Californians who have the disease. 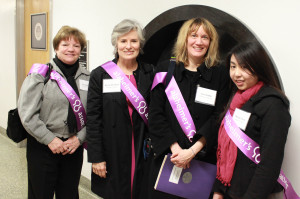 The volunteers, many of whom had never advocated before, traveled from throughout the state for the day-long event. We were divided into teams of four or five, with a designated team leader to facilitate the visits. Each team was assigned to meet with two or three lawmakers or their legislative aides. Everyone donned a purple sash imprinted with the words “Alzheimer’s Association” for instant visibility.

The day’s agenda was full. It began with inspiring remarks by Assembly Member Anthony Rendon, who recalled serving on the Board of the Alzheimer’s Association in Southern California and praised the Association for its work in raising awareness and providing services to families living with the disease.

Assembly Member Diane Harkey then shared tips for successful legislative meetings. This is an educational experience, she said, noting that, as a result of term limits, many legislators are new and will be meeting with Alzheimer’s advocates for the first time. Her advice: Pick out a few points, and make them clearly and concisely. Personalize the story, share your own experience, provide real-world perspective.

Next, advocates were briefed on the legislative goals for 2013. Assembly Members Mariko Yamada and Shannon Grove spoke movingly about their personal connection to the disease and the importance of extending the Alzheimer’s Disease Research Fund State Tax Check-Off (AB 394), a bill they have co-authored. While acknowledging they’re on polar opposite ends of the political spectrum, Members Yamada and Grove stressed that Alzheimer’s needs champions on both sides of the legislative aisle.

Advocates were then briefed on a three-year demonstration project to coordinate managed health care delivery for seniors and people with disabilities who are “dual eligible” for Medicare and Medi-Cal. In our meetings, we would be asking legislators to ensure that the California Department of Health Care Services, currently developing requirements for the delivery of care under the dual demonstration project, considers the special needs of people with dementia.

Senator Steve Knight closed the morning session with a rousing sendoff. Let your representatives know, he said, that this disease affects not just the person who has it, but that families live with the disease as well. Be strong, be direct, he urged. Tell your legislators: this is very important, this is what we need.

During a working lunch the teams strategized on their approach and assigned each person a role. After a tutorial on how to navigate the labyrinthine halls of the State capitol, our legislative meetings began.

Some first-time advocates had trepidation about the meetings would go, but those were quickly dispelled. As we told our personal stories, we quickly learned that we were the ones with expertise to share, and that the legislators and their aides were very open to listening. Some members and staffers had a connection to the disease, but many did not. Often they were unaware that Alzheimer’s is actually a fatal disease, not simply inconvenient cognitive impairment. Most did not know that Alzheimer’s is the sixth leading cause of death, and unlike the other leading causes of death, lacks a means of prevention or reversal.

As for our legislative “asks,” there was widespread support to extend the Alzheimer’s state income voluntary tax check-off, especially when we explained that the fund is now the primary source of funding for Alzheimer’s research in California, and no funds are provided from the state’s general fund.

Legislators and their staff members were less familiar with the dual demonstration project, but were interested in how it could improve managed care for people with dementia while lowering health care costs.

Though the meetings lasted only about 15 minutes, they formed the foundation of a relationship with the elected officials and the basis of continuing conversation about how to address Alzheimer’s disease in California. We were able to drive home the connection between what it’s really like to live with Alzheimer’s and how legislators can affect meaningful change. Because legislation is often data-driven, statistics are important. But personal stories make the data real, and they will be remembered after numbers fade.