A Poem for Dad: Hell-and the synapses that done it 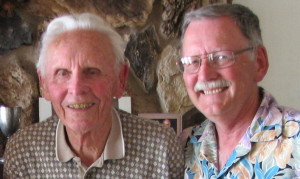 Jim Davis wrote a poem in honor of his dad, who passed away from Alzheimer’s disease this year on February 23. His father would have been 97 years old this month. Jim and his wife were his father’s full-time caregivers for more than 3 years. A retired engineer with 10 patents to his name, Jim’s dad was always extremely physically active despite losing one lung to TB in the 1940s. As recently as August 2012 he bowled a 166 with 6 strikes in a row! Here is the touching poem that Jim wrote for his dad.

Hell-And the Synapses that Done It

He applies his human reason
To facts not at all related –
And to say his false conclusions
Are erroneous is understated.

Fighting a losing war within,
He struggles for an appearance of normalcy.
But, there are so many cracks and flaws
All crumbles in sad absurdity.

His soul is trapped inside his body,
With expressions frustratingly checked –
Synapses deteriorating, scrambled understanding,
And relationships effectively wrecked.

He lives within this fleshly shell,
And struggles for recognition.
Losing connection with reality,
He desperately seeks affirmation.

Oh -The horror of this slippery slope,
This living analogy of Hell.
Able to feel on the inside,
But unable others to tell.

To know the truth, but not to know it;
To want to interact with the world –
Yet not to be sure that he can or he does,
Leaves his mind in a horrible swirl.

What’s happening in him is baffling;
To hope, to question, to doubt, to pursue –
Thoughts that leave him greatly perplexed
About how this Gordian knot to undo.

To have the truth before his eyes
Yet not be able to grasp it well –
To feel it there, yet beyond his reach,
Is a living picture of hell.

“But”, says he, “it’s not my choice and not my will,
This body where my soul does sit –
Have patience and take care of me.
It’s the synapses in my brain that done it.”