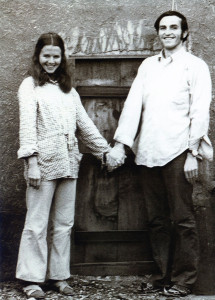 Paul and Susan were college sweethearts who had lived many adventures in their 38 years of marriage, including a stint with the Peace Corps in Afghanistan and teaching for two years in Norway, where their son James was born. The couple finally chose to settle in Reno, where they spent more than 20 years building their careers, family and community.

“My first recollection that something wasn’t right was when Susan wasn’t able to do simple addition or subtraction when balancing the checkbook,” says Paul. “Things got worse so we took her to a neurologist. He was the first person to bring up the possibility of Alzheimer’s.”

At the time, Susan was an elementary school counselor. After the visit to the neurologist and several instances of forgetting how to find a classroom or of having given a lesson, it became clear she would not be able to continue working. Her official diagnosis came in 2007 at the University of California, San Francisco following a thorough evaluation. After receiving the news, her first response was “Well, I might as well shoot myself.” She was 57 years old.

Despite her initial reaction, Susan used her great sense of humor to cope with the reality of Alzheimer’s. She and Paul also tapped into their network of friends and family for support. Their son James became a shoulder for Paul to lean on, checking in daily despite a busy medical school schedule.

“I think the hardest part of this disease was knowing that it was never going to get better, that there was no hope of her surviving this,” says Paul.

Indeed, Susan’s decline was steep. She got into a couple of car accidents and had to give up driving. She lost the ability to walk and communicate. She stopped recognizing Paul and James. By August, 2009 Susan was in hospice and she passed away on March 2, 2010.

“We felt that we lost Susan far ahead of the day she actually died,” says Paul. “We had started grieving long before, when she was no longer her.”

During their journey with Alzheimer’s, Paul became involved with the Alzheimer’s Association and chaired the 2009 Memory Walk in Reno/Sparks. Today, he is an active member of the Public Policy committee.

“Above all, Susan was a very giving, caring person. I know she would want something positive to come out of her journey and death,” says Paul. “This is a small thing I can do to help and volunteers are a key part of the Alzheimer’s Association’s efforts to increase research dollars that will lead to a cure.”

When asked what he would tell other families currently coping with Alzheimer’s, Paul says the first thing to remember is to get help. Tap into family and friends, pay for extra help if you can afford it and take advantage of support groups.

“There are no 100 percent right answers in caregiving. Every patient is different and every caregiver is different,” says Paul. “This disease takes a heavy toll, so seek advice from people who have gone through this. They’re the only ones who can really understand.”