Film accurately portrays Alzheimer’s – but will it inspire advocates or drive them away? 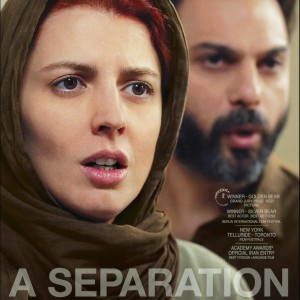 To prove to you how lacking I am in movie trivia, I did not realize that “A Separation” won the Academy Award for best foreign film until I went to see it yesterday.  Having read some reviews, I knew a bit of what to expect; in my opinion, the excellent reviews of this Iranian film were all accurate.

While there are many themes coursing through this film – all heady, all intense, many tragic —  a not insignificant piece revolves around the father of one of the main characters who has Alzheimer’s.  His disease is fairly advanced and the son is absolutely devoted.  In fact, that devotion is a large reason for the discord between him and his wife.

In this regard, the film made we think about two things.  Number one, I was amazed that I actually could watch this movie, as usually films depicting someone living with Alzheimer’s are just too tough for me to sit through. And frankly, they often don’t ring true.  But, the actor’s portrayal was so realistic, the film showed the day-to-day frustrations so clearly, the acts of desperation were so plainly obvious, the sad and scary scenes seemed so real, that I felt I was watching something very authentic.  It was not a pretend drama.

Number two, I wondered if this image of the man with Alzheimer’s – clearly someone whose cognitive ability has declined quite significantly — harms or helps our advocate’s desire to create public awareness about the disease.  Will this kind of portrayal lead people to avoid the topic entirely or will it open their eyes to the human story that is Alzheimer’s?  I’m hoping the answer is the latter.

This part of the story was robust from so many different aspects – among others, it dealt with family devotion and conflict, multi-generational issues, caregivers trying to do the right thing, but not knowing enough and/or not knowing where to go for help, and the importance of creating an environment that includes, not ignores, the person with Alzheimer’s.

It would be interesting to examine all of the images of Alzheimer’s over a period of time – in movies, in books, in news stories — and see just how they all shape people’s feelings about the disease, their desire to help and donate and their desire to advocate for the cause.

All very interesting, don’t you think?