Petaluma Walk to End Alzheimer’s – another demonstration of #SonomaStrong

#SonomaStrong – it’s a phrase that started showing up in October, after the devastating fires ripped through Sonoma County and other parts of northern California. It’s also a phrase that represents the dedication of local Alzheimer’s Association staff, volunteers, sponsors and participants involved in last Saturday’s Petaluma Walk to End Alzheimer’s.

Neither fire nor evacuations stopped our team
For a week, the Alzheimer’s Association office in Santa Rosa could not open its doors. But that did not stop the staff and volunteers, some of whom had been evacuated from their own homes, from assisting families. While living with Alzheimer’s disease can challenging, now many families and care communities were facing Alzheimer’s disease and evacuations or the loss of their homes.

Where is Mom?
Some of the initial calls into our Helpline (800.272.3900) were from worried family members whose loved ones lived in care communities in the evacuation area. Our staff quickly sprung into action, researching the new locations of care community evacuees and compiling a list to help others. They also offered to train staff and volunteers at evacuation centers where residents with Alzheimer’s were staying.

What about the Walk? 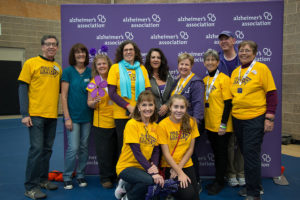 Some of our dedicated Walk Committee members

It’s not easy to postpone an event that volunteers have been working on for several months, but given the devastation the community was facing, it did not seem appropriate to hold the Petaluma Walk to End Alzheimer’s on its scheduled date of October 21st. There were too many urgent needs in the community, including the needs of individuals with Alzheimer’s and their caregivers who had been affected by the fires. So the team postponed the Walk.

Time for “plan B”
Our amazing volunteer committee came together to find the best alternative to the original plans. What might be a great outdoor venue in September is not as appealing in December. So they improvised – what about an indoor Walk? While it’s the Petaluma Walk to End Alzheimer’s, does it really need to be held in Petaluma? These discussions led to the selection of Sonoma State University’s indoor track for the December 16th Walk. To their usual activities, they added a moment of remembrance for those lost in the fire and a canned food drive to benefit the community.

Patti Wick, the Walk committee’s mission chair, was one of the community members who lost her home in the fire. Despite the loss, Patti still attended the Walk in honor of her mother and mother-in-law who died of Alzheimer’s disease. “It’s hard to know what to prioritize at this point,” said Wick, “but I wanted to be there. I know we will rebuild this community – and when we do, we will still have Alzheimer’s to tackle.” 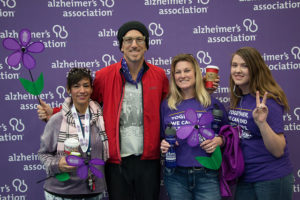 We are so thankful for our Walk sponsors and participants who rolled with the changes and came out last Saturday to participate in the rescheduled Petaluma Walk to End Alzheimer’s. It was a great event. If you weren’t able to attend, you can view photos from the Walk.

While the need for Alzheimer’s Association programs and services for families in Sonoma County hasn’t changed, Walk fundraising is lower than normal this year. They have raised over $286,000 towards their goal of $440,000.

Our participants and volunteers are continuing to seek additional donations through the end of the month. You can show your support and help them finish the year #SonomaStrong by making a donation to the Petaluma Walk to End Alzheimer’s.