On a Personal Note”¦Wah Ho Chan 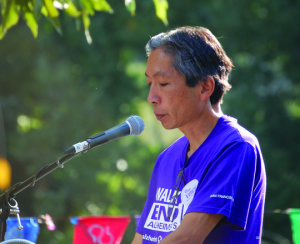 I’ve been married to Martha for 30 years. We have two daughters who are now adults and a granddaughter who just started kindergarten.

I moved to the Bay Area because of my best friend from seventh grade David. He ended up here, and when I came to visit him, I decided to stay. We were going to make movies. We took film classes at De Anza College, and then I worked there, first as an assistant and later as a teacher. I got into the Stanford film program, became a cameraman and did that work for 30+ years.

About four years ago, my wife and daughters noticed something that seemed to be more than my usual forgetfulness. I couldn’t do simple math anymore and I couldn’t figure out how to put things together that I would have done in my sleep before.

My wife came with me to see our doctor, who did a basic mental status exam, then referred us to Kaiser’s Memory Clinic in Santa Clara. I had an MRI and went through about four hours of neuropsych testing – that was lots of fun! They gave me a diagnosis of Mild Cognitive Impairment in May of 2008. After more testing in September of that year, I was diagnosed with Alzheimer’s disease, and began taking Aricept.

Alzheimer’s has taken away a big chunk of my life. I got married in 1980 and became a father in 1981 and again in 1985. I have always taken my responsibilities as a husband and father very seriously. I have always been able to take care of my family. With Alzheimer’s, that became a lot harder to do. My role has changed: it’s swung around 180 degrees.

I was able to keep working until December of “˜09, when friends I worked with told me that I needed to stop. I decided to surrender my driver’s license last November, when I couldn’t pass the written test. I had to stop driving my granddaughter to and from pre-school, which was one of my contributions to the family.

Martha’s role has changed, too. She is now the breadwinner and my chauffeur. Our daughters worry about the future for both of us. And I can’t do the things I used to be able to do for them.

Martha suggested that I tell you what I can still do:

The Alzheimer’s Association has enabled me to see that I’m not alone. I started participating in an early stage support group right after I was diagnosed, and Martha went to a group for spouses that meets at the same time. Later, a younger-onset group was started near our house and we’ve been participating in that one, too, for about a year.

Having the group allows me and the other members a safe haven to share our ups and downs. We can say to each other “does this happen to you?” When we can be with others who have Alzheimer’s, it makes our lives feel more normal.

Right now, the support groups are very important to us. It’s also important to know that, as things change, the Alzheimer’s Association can help us find the information we’ll need later on. They also provide funding and support for research, and help people find clinical trials so we can contribute to finding treatments and – we hope – a cure for this disease.

When you have Alzheimer’s, it’s really difficult to do it by yourself. It’s important to find people who can help you. You have to show up to get help! It helps to talk to your doctor or people you know who might already have the disease or who have a relative who does.

The Alzheimer’s Association’s mission is to help you find the help you’ll need to contend with the disease. The first step for us was to find a local group and spend an afternoon with other people seeking help. It’s also important to take actions like educating people about the disease, writing letters in support of more research, participating in clinical trials, and showing up for fundraising events.