I am just back from Hilarity for Charity, a fundraising event put on by Seth Rogen and his wife Lauren Miller. Lauren’s mother was diagnosed at the age of 55, when Lauren was just 25 years old. Lauren and Seth organized this event to help raise money for the Alzheimer’s Association and dispel the myth that Alzheimer’s is just an old person’s disease.

“Tonight, we will laugh to forget how sad this disease is,” Lauren says in the program. “But, more importantly, we’ll laugh to remember that changing the destiny of this illness is up to us.” 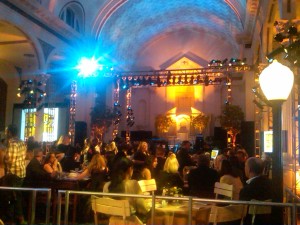 My view of the VIP area and stage at Vibiana LA

In short, the night was spectacularly star-studded and truly amazing! Seth Rogen, Judd Apatow, Paul Rudd, Tenacious D, DJ Pauly D and Bruno Mars were just a few of the people who took to the stage and I spotted Terrell Owens, Sophia Bush and countless others in the audience. Seth ran the show from the back of the room and did a great job. You could tell when you looked at him that he was having a blast and was so proud of the event, as he should be! It was great to see the Hollywood crowd getting into our cause.

The highlight for me was Bruno Mars who performed an awesome medley of tunes from classic rock to 80’s hip hop. And I have to give props to the ice cream sandwiches at the end of the event! Brown butter candied bacon ice cream? You’ve gotta try it!

But it wasn’t the great food and entertainment that made this event special. It was the mission of the Alzheimer’s Association. Lauren and Seth’s story resonates with me because my own mother was diagnosed with younger onset Alzheimer’s disease. She was 52; I was 25, just like Lauren. As I read Lauren’s story in the event program I reflected on my own journey with my mom. We watched her steadily decline during the first few years of the disease, forgetting how to do basic things around the house and repeating the same questions over and over again. I remember the day she didn’t know who my dad was and the day she forgot she had children. 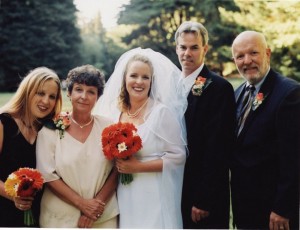 From L-R, me, my mom, my sister, my brother in law and my dad at Shannon's wedding

I also remember the day my sister got married and I had to walk my mom down the aisle as she could no longer find her own way. Lauren talked about her own wedding and how rather than her mom and dad walking her down the aisle, she and her dad walked her mom. This to me really pinpoints the unique grief that comes with younger onset Alzheimer’s disease: Knowing that my mom won’t be at my wedding, that she won’t meet her grandchildren, that my parents won’t get to take the trips they planned in early retirement, reminds me of everything this disease takes from us and why we have to do something about it.

What also resonates with me about Seth and Lauren and the event they created, is their need to do something  and to make a difference in the fight. Our family started our own fundraising event after  mom’s diagnosis and it helped us immensely in our struggle with Alzheimer’s. The simple act of standing up and participating in something that can make a difference in the lives of people with Alzheimer’s has amazing healing power when it comes to dealing with the grief of this disease.

As director of special events at the Alzheimer’s Association and as a volunteer facilitator of a support group for family members of younger onset individuals, I’ve met amazing people who prove Alzheimer’s really is not just an old person’s disease. I hope that like Seth and Lauren and so many of the other young people out there affected by Alzheimer’s, you choose to take a stand against a disease that takes too much.

In my opinion, the best way to do this is through Walk to End Alzheimer’s, the nation’s largest movement to end this disease. Look forward to new Walk dates coming soon to www.alz.org/walk by February 1!