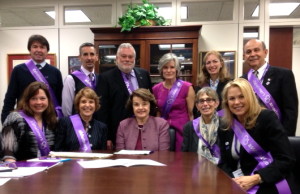 Achieving change through legislation can be a long, drawn-out process. When you’re impatient for a way to cure and treat Alzheimer’s disease, the pace can seem particularly slow. So it was very exciting to see real progress last month when Senator Dianne Feinstein took a big step toward taking politics out of Alzheimer’s research funding by co-sponsoring the Alzheimer’s Accountability Act. In so doing, she joined 12 members of Congress from Northern California and Northern Nevada (listed below) who have demonstrated their commitment to ending the disease by co-sponsoring the House version of the same bill.

For Alzheimer’s Association volunteer advocates who worked hard to garner their support, co-sponsorship by these bipartisan officials is reason to celebrate and thank them for their continuing leadership in the fight against Alzheimer’s. But there’s still more work to be done.

Here’s what the Alzheimer’s Accountability Act would do and why is it so important: In 2011, Congress unanimously enacted the National Alzheimer’s Project Act, directing National Institutes of Health (NIH) scientists to develop a plan to prevent and effectively treat Alzheimer’s disease by 2025. The National Alzheimer’s Plan set milestones and timelines to achieve this goal, but it didn’t specify how much money NIH would need to fulfill that mandate — now little more than a decade away. To date, Congress and the President have been left to rely on educated guesses and/or political maneuvering to decide how much funding to allocate to Alzheimer’s research.

The Alzheimer’s Accountability Act would fix that problem. By creating a mechanism for scientists to communicate directly with Congress, Alzheimer’s research funding could be removed from the political arena. Specifically, the Accountability Act would require the Director of the NIH to prepare and submit, directly to the President and Congress, an annual estimate of the funding the NIH needs to fulfill the 2025 mandate. This technique, known as a “professional judgment budget,” has been very successful in fighting cancer for more than three decades. Cancer research funding now totals more than $5 billion annually, and deaths from breast and prostate cancer have dropped significantly.

Harry Johns, president and CEO of the Alzheimer’s Association, called the professional judgment budget “a tool to better inform Congress of the realities faced by the scientific community,” adding, “we must follow this strategic path if we hope to achieve the goals of the National Alzheimer’s Plan.”

But to stay on this strategic path, the Alzheimer’s Accountability Act must become law. And to do that, the number of co-sponsors must reach the critical mass necessary to compel a vote in both houses of Congress. So here’s what we must do next to expedite this law:

We need the support of every member of Congress now. This isn’t a partisan issue — Alzheimer’s disease doesn’t respect party affiliation, and 2025 will be here before we know it.