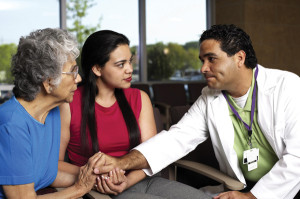 Who would have thought that the ability of medical personnel to administer cognitive tests for their patients could get them sued?

But, according to a January 4 article in the San Francisco Examiner Doctors fear copyright crackdown on medical procedures, a company that holds the copyright for one such test started to enforce its claim.  The bottom line is that a simple three-minute memory exercise may end up costing more to administer if a question as basic as “what is today’s date?” is part of that copyright.  As one UCSF doctor said in the article, “There is no other way to ask someone “˜what is today’s date?'”

It seems to me that there is truly very little new under the sun. Regular folks like you and me, as well as medical professionals seeking to improve diagnostic methods, build on existing research and procedures.  Could the threat of lawsuits really prevent research from improving existing techniques? Will this be yet another barrier to helping our Alzheimer’s families get a diagnosis?

Attorneys agree that the area is uncharted, and until recently copyrights have not been enforced in medicine. Some say this is because medical professionals were unaware of their rights or they felt the interest of medical advancement was more important – I hope it was the latter!

I know next to nothing about copyright laws but have read that copyright protects the written word, not the idea behind it. So, if the idea is how you diagnose a condition, some attorneys say it’s borderline as to whether a particular way to do that is protected by copyright. Also, if a test is so basic (e.g. “what is today’s date”?) as to have no alternative, can that really be protected under a copyright? Don’t know – common sense tells me one thing but once the law is involved, it gets very complicated.

Although I find this issue immensely interesting (it seems to excite those little gray cells in my brain), mostly, it makes me mad. Innovators need incentives to take risks. Positive results deserve rewards, but unabashed greed is something else. So, this situation seems a bit perverse to me. Why deny people the tools they need to provide essential services and/or drive up costs unnecessarily?

One idea that is floating around is to promote an “open-access” form of copyright that would allow free access for users (for example, doctors) but anyone profiting from the material (say, a textbook company) would have to pay. At least that’s a start; who knows where it will go.

Speaking of money changing hands, I’ve got something else for you. In a January 10 New York Times Op/Ed article by Michael B. Eisen, a professor at the University of California, Berkeley, a new bill called the Research Works Act has been introduced. This bill will end the practice of providing access to the results of research conducted by the National Institute of Health (NIH) free of charge via the U.S. National Library of Medicine’s website.

According to Eisen, here’s what that means: research that you, the taxpayer, has already paid for through your tax dollars, would cost you $15 to $30 for each research paper you wanted to access. The battle is between the publishers of biomedical research journals (e.g. the New England Journal of Medicine) and patient advocacy groups, researchers and librarians who want open access to publicly funded research. The NIH is the largest funder of Alzheimer’s science and this bill would prevent that research from being easily shared and accessed by Alzheimer’s researchers, physicians and families.

The issue isn’t as simple as it seems, but why don’t we ask just one question that helps get at the root of the dilemma: who would benefit and who would not? The answer seems pretty clear to me.