On a Personal Note… (Luz Gonzalez)

“My father died of complications from diabetes at the tender age of 59 and I thought I had experienced one of the worst diseases known to mankind. Diabetes slowly robbed him of a normal life and future with us. I loved him dearly and my contribution to him was a kidney back in 1996. Unfortunately, he died 18 hours after surgery. The last words he spoke on his way into the surgery room were, “˜all I ask is that you all take care of your mother.’ Dad’s disease brought us closer as a family.

Mom’s disease broke us apart for years. Mom birthed six children, took care of Dad because he was sick often, and worked full time as a farm worker. She was loving and tender, but was also strong, assertive, and tenacious. Six months after Dad died, I found her crying and she told me that when she closed her eyes, she couldn’t see Dad’s face. I remember telling her that she had a ton of pictures of Dad spread all over the living room and all she had to do was look at them.

By the time she turned 66 years of age (nine years after Dad died), she told my brother that she often found herself lost, not remembering how to get home. I thought she was exaggerating. I thought she just wanted our attention. I was wrong.

I had her diagnosed in 2003. But my family would not accept the diagnosis because, according to them, “Mom remembered everything.” You see, Latinos have a hard time understanding what Alzheimer’s is. They hear their loved ones talking about events that happened 20 or 30 years ago and they confused that with perfect cognition. After arguing amongst ourselves for well over a year, my sibling finally let me put Mom in adult day care. By 2007, after arguing for months, we put Mom in a nursing home. 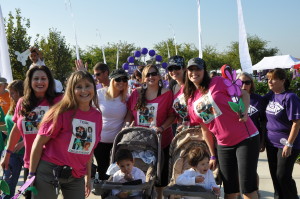 Luz Gonzalez with her Walk to End Alzheimer's team

During this time, I made sure that she had me by her side three to four times a day. I fed her lunch and dinner every day. I saw her quickly transform from a strong and assertive woman to a gentle baby. I spent two years touching her, smelling her, kissing her and putting my head on her chest to listen to her heartbeat. I wanted to engrave in my heart forever every aspect of the woman that birth and nurtured me.

It appears that Alzheimer’s runs in our family. My sisters and I live with the constant fear of getting it. It is because of Mom – and us – that I am Walking.”