Giving up the keys: One caregiver’s experience 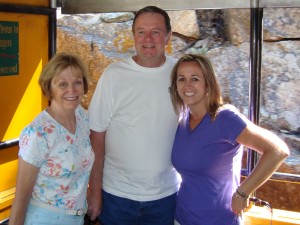 I hope you enjoyed yesterday’s input from some of our early stage support group participants. For today’s National Caregiver Month discussion about driving, I’m pleased to introduce you to Janet, a caregiver who has “been there” and knows what it’s like to have this difficult conversation. Here’s her story in her own words:

“Hi! My name is Janet Vanden and I am my husband’s full time caregiver. My husband Marc began showing signs of dementia in 2006 at the age of 55. In 2007, Marc was officially diagnosed with Alzheimer’s by the UC Davis Alzheimer’s Disease Center.

Marc was driving from the time he showed symptoms up until his diagnosis. I began noticing that he was getting lost very easily. He was driving really slowly to avoid other cars or really fast to get out of the bunch. Accidents became a huge concern; but there was nothing I could do or say. He did not like it if I offered or asked to drive and most times, he would not give up the keys. When officially diagnosed by UC Davis, they informed me that they were required by law to report the results of Marc’s diagnosis to the DMV. Once the DMV reviewed the results, they would require Marc to take both the written and driving test. If he failed, he would lose his driver’s license.

Of course we all know how long it takes the DMV to process anything, so Marc continued to drive. When we finally received a letter from the DMV stating that his license had been temporarily suspended until he came in to take the tests, I knew it was time to have this dreaded discussion with Marc.

I looked to our kids, Emily, Nick and Molly for help. Since Molly lives closest, she has been primarily involved with helping me and Marc out through this unknown journey. She and I decided to take him to his favorite restaurant for dinner and attempt to break the bad news. To this day, I still believe that he knew something was wrong, but he didn’t say anything. At the end of dinner, we broke the news. We explained that the DMV had sent a letter temporarily suspending his license. He went silent. He refused to say anything to us.

By the time we got home, he was very angry at us, and blamed us for notifying the DMV. He was adamant that he would be taking the tests and was very capable of driving. His anger and determination to succeed in keeping his license continued over the next several weeks.

We finally contacted his doctor in hopes that she could talk with him and explain the reasons for this current event. She told Marc that she was the one responsible for signing off on the paper work that was sent to the DMV and she was the one he should be blaming. She quizzed him about him being lost, speeding and not remembering what he was doing in the car. He denied everything (although we believe he knew it was true) and said he wanted to take the test.

Fortunately, I always had some excuse as to why I didn’t have time to call the DMV. After a few months, we were able to reason with him and tell him that it was not a good idea for him to drive. We did sell a car in the meantime; and I believe if we hadn’t, that he would have taken it out for a drive on the town.

After jumping this hurdle, Marc has become content with other people driving. Only on occasion does he say he will take the car out for a spin. But we are all sure that he won’t.

So my advice to those who are struggling with this hurdle: let the person talk about taking the test again, but if you feel that he or she should not be driving, don’t act upon it. Even if he or she wants to drive around the area they are accustom to, it is not safe. You as the caregiver don’t need anything else hanging over your head; like a fatal accident.”

Janet, thank you for sharing your experience with us. I’m sure it will resonate with many of our readers. Don’t forget to share your experiences here, on our Facebook page or at www.alz.org/nadam. We want to hear from you!