Angie deals with some unwelcome visitors 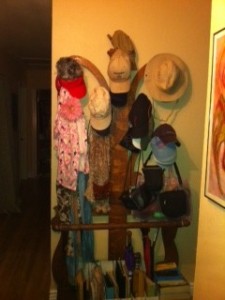 In less than 60 days will have reached the three year mark of John’s Alzheimer’s diagnosis. Amazingly, even though I know the prognosis for the disease, I thought that we could hum along where we were at the two-year mark when my husband was at 80 to 85 percent of his old self. That obviously was a dream.

John can still do many, many tasks: gardening, dishes, laundry, making the bed, taking care of himself and our dog Tobey. But I have recently found out that he isn’t doing it all alone. When I came home from work the other day my husband met me at the door to tell me there were people in our house.

I was expecting the delivery of a new dishwasher so at first I thought that the installer was hard at work. John quickly put that idea to rest. He said a lot of people had come out of our antique hat rack and were now sitting on the floor drawing. Since they had been there all day he was tired and wanted them to go away. Would I please make them leave?

This disease takes you on such a crazy journey it is hard to prepare for it. It wasn’t the first time John thought people were at our home. A month or so earlier he told me that there were people in our backyard milling around and a man was sitting at our patio table. When I brought this incident to the attention of our doctor he said that John was not hallucinating, but that his mind was misinterpreting what he saw.

I had left a collapsible cooler on the table directly in front of a chair to air-dry. It was navy blue with a maroon stripe like a Rugby shirt. The tall rosebush directly behind it, with salad plate sized pink flowers could look like a face. Add a gentle evening breeze and you have a crowd. This time the hats, scarves and purses hanging on the rack made John think of a bunch of people. It wasn’t too far a leap for him to envision them stepping out into the room.

I stood on the porch not knowing whether to laugh or cry. Before entering the house I took a moment to calm myself. Touching his arm I looked into John’s eyes and asked if these people were mean to him. He shook his head, no. Did they scare him? I could see he was surprised I asked that. Again no. Frustrated he said he was just tired of them. Make them go away.

Taking a deep breath I marched into the house and in a loud voice cried out, “Okay, that’s it for today, everybody out. I’m home and you have to go.” I stomped around a bit then came to the door and looked at my husband standing expectantly on the step.

The words “all gone” brought relief to his face, his body visibly relaxed. I think it was partly because I didn’t question if the people were real””they were real enough to him””and partly because I made them leave.

As I prepared dinner, we talked about how often these folks came to visit. I needed to know the details: when did they start to appear, what did they do, where did they go in the house. To see if we could eliminate the visits, we decided to clean up the jumble of items we had stored on this piece of furniture. I removed hats we no longer used, put scarves away in drawers and placed umbrellas in another location. It helped some, but not enough. Eventually I had to move the whole thing to another room, out of his line of sight when he sits in the den.

Our doctors have been sympathetic, but there is little for them to offer. We are not ready for drugs so we will take it a day at a time. I jokingly told John that as long as he felt safe with these visitors I was happy that he wasn’t home alone while I am at work.