Dear Researchers: A Message from Vincent 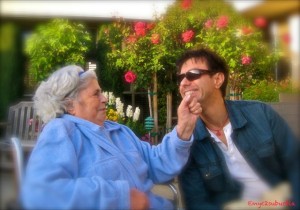 I don’t know when I became fully aware of it, but at some point, I became Mama’s caregiver. It’s not a role I would’ve chosen, by any means. I do not have pets, children or anything else that could make my life more chaotic… that’s always been my choice. But something changed when I felt I no longer had that choice or freedom – it’s called Alzheimer’s.

Ten years ago, I was in the social worker’s office checking in Mama’s clothes and labeling them to admit her into a nursing home. I was an emotional wreck fighting back the tears – my mother was NEVER going to live in a nursing home. The social worker told me that my mother made a remarkable recovery from her major surgery and may appear to be fine, BUT she is in the beginning stages of Alzheimer’s! Back then not much was known about this awful disease… it was what it was and my life has never been the same since that day.

I’m very optimistic with the positive research being done that brings a greater visibility to Alzheimer’s. The research seems very promising with the trial studies & new drugs becoming available. It’s a relief to know that there may be a cure for Alzheimer’s in the near future. It would be great to see this debilitating disease (which is devastating to the patient, the family and all those around) have a cure soon. I’m looking forward to the day when it will not affect anyone else and hopeful to see it happen in my lifetime. Is it realistic to be as positive as I am that a cure will be found for Alzheimer’s in the near future? Has the actual cause of Alzheimer’s been determined, specifically genetic, diet or other factors?

Research in Alzheimer’s is extremely important because as I mentioned it not only destroys the person suffering from the disease but all those around… the caregivers, the family, the community. I can speak for many friends, family, extended families & associates that we’re immensely grateful for the continued research & it’s progress. So thank you all for your hard work & positive nonstop dedication to ending Alzheimer’s.