Dancing out of her comfort zone for The Longest Day

This San Jose resident turned her love of dance into a successful fundraiser.

While Ai-chu Wang has been dancing all of her life, she’d never hosted a large fundraiser. Peining Chang, Community Outreach Specialist with the Alzheimer’s Association, suggested that Ai-chu turn her love of dance into an event for The Longest Day.

A passion for dance
Ai-chu is involved in several dance-related organizations and has many friends who dance. She also has a passion for supporting the Alzheimer’s Association. Ai-chu had reached out to the Association when she was a long-distance caregiver for her mom, who had Alzheimer’s.

After considering Peining’s suggestion, Ai-chu decided to host a dance assembly for The Longest Day. Ai-chu put together an event involving international folk dance, line dancing and Zumba. This allowed participants to take part in familiar dances, as well as some that were new to them. 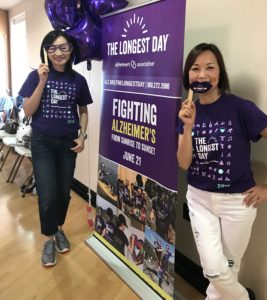 First Ai-chu contacted three major dance organizations with which she has been involved: the California Line Dance Association of America, Silicon Valley Folk Dance Club and Organization of Chinese American Women. These groups like to support activities that benefit good causes.

Ai-chu shared her idea with each group’s leadership and asked if they would like to support the event. All three groups immediately said yes. This initial support gave Ai-chu more confidence that the event would be successful.

Working out the logistics
The next task was to find a large indoor facility to rent for an affordable rate. She secured space in Saratoga at a venue that discounted the rental fee for nonprofit events.

Family and friends helped Ai-chu create the promotional materials. The dance organizations shared the information with their members. Ai-chu invited her friends and social groups.

Ai-chu did not set a particular donation amount for event attendees. She encouraged people to come and exercise and help raise awareness about Alzheimer’s.

“Just come, you don’t have to donate,” Ai-chu told people. “If you’re willing to donate, that will be a bonus. The more that people know about the Alzheimer’s Association and how it can help families, the better it will be for our community.”

Early fundraising success
People started responding right away, which excited Ai-chu. One of her friends donated $1,000 to support the event and to help Ai-chu get off to a good start.

Someone else she knew donated $3,000, which was a big boost. Ai-chu’s brother, who lives in Los Angeles, also contributed.

Ai-chu raised her goal to $5,000 and kept increasing it more as people donated. She raised over $15,000 for Alzheimer’s care, support and research.

It all came together

On the day of the event, Ai-chu wasn’t sure how many people would participate. Forty people had signed up in advance, but over 70 people attended. Many brought donations.

After the dancing, guests had an opportunity to mingle with each other. They were also able to learn more about Alzheimer’s Association programs and services.

Many of the participants had experience with folk dancing, line dancing or Zumba, but not all three. They got a good workout and enjoyed the opportunity to learn a different type of dance.

The three-hour event was a great success. Ai-chu appreciated all of the people who participated. She also had friends who donated, even though they could not attend.

Watch a short video from the event:

The generosity of friends
Ai-chu was very moved by the individuals who supported her efforts. Some friends secured matching gifts from their employers.

One of Ai-chu’s friends has a large loquat tree. The friend climbed the tree to gather the fruit and sold it. She donated her sales, $600, to Ai-chu’s event.

“Whether or not Alzheimer’s has affected your family, you are making an investment in yourself,” believes Ai-chu. “Our goal is to find a way to prevent, treat or cure Alzheimer’s. I hope that while we are still alive, we see that result. We can also hope that someday the next generation will not have to worry about this disease.” 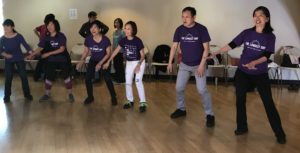 For those thinking about participating in The Longest Day, Ai-chu shared some suggestions:

Ai-chu reflected on what helped her be successful. “I’m very happy that I was able to take an activity that I have loved for so long and use it as a tool to raise funds for such a good cause,” she shared. “I could not have accomplished this goal without the support and generosity of my friends, family and the dance community.”

Register for The Longest Day and we’ll help you turn your favorite activity into a fundraiser for Alzheimer’s research, care and support.