Local Volunteer Leaders Share the Low Down on The Longest Day

The ability to honor a loved one with dementia, a desire to support a local nonprofit, a wish to meet new people, the love of an activity, the desire to give back as a company, the chance to learn new skills, the opportunity for employee team building – these are some of the things that inspired people like Rick, Ben, and Loretta to participate in The Longest Day.

Held annually on June 21st, the summer solstice, The Longest Day symbolizes that the journey of those living with Alzheimer’s disease and their caregivers can involve many long days.

If you answered yes to one or more of these questions, then we encourage you to participate in The Longest Day.

Leaders of our chapter’s 2018 planning committee shared their thoughts on what makes The Longest Day such a fun event.

Editor’s Note: One of the volunteers interviewed for this article, Rick Smith, passed away suddenly in January 2018. Rick was one of the biggest supporters of The Longest Day, and we know he would want his words of advice to live on. We honor Rick’s passion for the cause, and will remember his long service as one of our most dedicated and zealous volunteers. 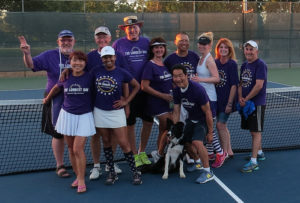 Rick Smith (back left), with group of tennis tournament participants

Rick Smith: Do what you love, with people you love, to honor someone you love
Rick Smith lost his wife to younger-onset Alzheimer’s and served as our planning committee chair for three years. His family held several team activities: an Internet music jam session, a tennis tournament, a golf event and a company event. Rick’s suggestion was to “do something that you really enjoy and have fun with it. It can happen on the Internet, in the privacy of your home, at a sports facility or other location.” 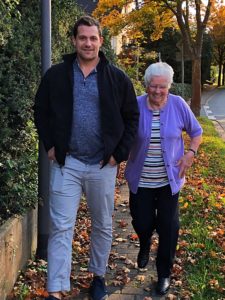 Ben and his grandmother

Ben Huppertz: Add purpose and passion to your hobby
Ben Huppertz had recently moved to the Bay Area, and was looking for a way to support a worthy nonprofit and meet people in the community. Ben’s grandmother has dementia and he was impressed with the impact that the Alzheimer’s Association is having on research funding. In 2017 he joined the planning committee, and served as the chair in 2018. Ben suggests that The Longest Day gives you the opportunity to “take your hobby to the next level.” For example, if you like to play a particular game or sport, get some friends together and have a tournament on The Longest Day.

Loretta Sholler: Join in with friends and family from around the globe
Loretta Sholler has been involved with The Longest Day for five years. Initially she started a family team, in memory of her grandfather, who passed away from Alzheimer’s. “I like to be proactive in difficult situations,” she says. Loretta’s grandfather loved to garden, so her family formed a team and gardened on The Longest Day. This activity worked well, because even though her family lives in different cities, they could still participate together. 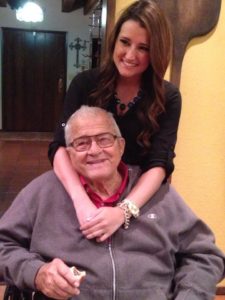 Loretta and her grandfather

In 2018 Loretta co-chaired The Longest Day planning committee. She focused on increasing participation by her employer and other tech companies. Since June is also Alzheimer’s and Brain Awareness Month, Loretta suggests people choose an activity that focuses on brain health, such as physical activity, a healthy meal, or something that keeps your brain active.

It doesn’t have to be one event or be held on June 21st
For some teams, having multiple smaller events throughout the year may be a better option. That’s what Loretta’s company team did. Rick mentioned that “while we honor the event on The Longest Day, you can do things long before or long after June 21st.”

How to get started
Ben, Loretta and Rick all shared that once they started talking with others about why they were supporting the Alzheimer’s Association, they were surprised at how many friends, neighbors and coworkers knew someone with Alzheimer’s or another cognitive impairment. Once you’ve found other people who are interested, find out what the group members like to do and build a team around that. Sometimes team members choose multiple activities – not everyone has to do the same thing.

Get started today at www.alz.org/tld. Sign up by December 21st to receive a free insulated cooler bag and a performance t-shirt upgrade.

Interested in being part of the volunteer committee? Reach out Steven Krzanowski, The Longest Day Manager, at 415.463.8507 or skrzanowski@alz.org.

Helpful information related to this post
For more ideas or to register, visit The Longest Day website
10 Ways to Love Your Brain