Results from risk reduction, treatment and caregiver studies were shared.

Did you notice more news this week related to Alzheimer’s research? That’s because over 5,900 researchers from 68 countries attended the Alzheimer’s Association International Conference (AAIC) in Chicago. For the first time, the majority of attendees (53 percent) were women. 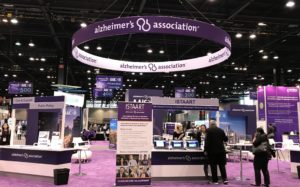 Researchers gave 2,875 scientific presentations on research related to Alzheimer’s and other cognitive impairments. Over 200 scientists from our chapter attended the conference, with several of them presenting their own research.

A few members of our staff attended to help us share the news with you throughout the week. In case you were on a remote island or are just a busy caregiver, we’re happy to provide a recap.

Sunday’s featured studies included a study conducted in our region on the prevalence of dementia in the lesbian, gay and bisexual community. Jason Flatt, Assistant Professor at the UC San Francisco School of Nursing talked about his study for us and the implications for Alzheimer’s care in the LGBT community.

Dutch researchers looked at nearly 4,500 people with early onset dementia. Median survival time was six years. The age of the persons (younger than 65 or 65+) did not significantly impact the length of survival.

Claire Day, our Chief Program Officer and Dan Lawler, Executive Director of the Desert Southwest Chapter shared their experiences with us at the end of the first day.

Monday – Women & Alzheimer’s – how reproductive history may impact dementia, impact of hormone therapy on cognition, sex-based approaches to diagnosis; the use of virtual reality to increase understanding of Alzheimer’s and recruitment strategies for Alzheimer’s research

Research highlighted sex differences associated with dementia and Alzheimer’s disease across the life course, including the first ever large-scale study of reproductive history and dementia risk in women.

Data from the Alzheimer’s Disease Neuroimaging Initiative suggest women have an advantage in retaining memory for words and verbal items, not only during normal aging but also during amnestic mild cognitive impairment. When a gender-based diagnostic approach was applied, it resulted in improved diagnostic accuracy in both sexes. This suggests the need for, and value of, alternative approaches “” such as sex-specific “cut points” in diagnostic tests “” to improve early detection in women.

Virtual reality technology gave high school students greater insight into what it’s like to live with mild cognitive impairment or Alzheimer’s disease. By experiencing aspects of someone else’s journey, the students gained a better understanding of, and empathy for, older adults and their struggles with dementia.

Participation in studies has not kept pace with the acceleration of research and great need for volunteers. The impact of low participation impedes progress toward generating study results. Representatives of the National Institutes on Aging at the National Institutes of Health reported progress on a national effort to help study sites and researchers recruit and retain volunteers for Alzheimer’s and other dementia studies. Researchers also reported on efforts to recruit and retain research volunteers from diverse backgrounds.

Elizabeth Edgerly, our chapter executive director, and Dan Lawler from the Desert Southwest Chapter, provided an update via Facebook Live.

Symptoms such as agitation, anxiety, apathy, depression, wandering, hallucinations, insomnia, incontinence and disinhibition often cause the greatest caregiving challenges and are the leading causes for placement in assisted living or nursing homes. A few of the studies included:

Four studies investigated how the digestive system, including gut and liver functions, may be related to changes in the brain, and to brain disorders such as Alzheimer’s disease and other dementias.

Claire was back at the end of day three to give us the highlights.

We also had the opportunity to catch up with another local researcher. David Johnson from UC Davis talked with us about his research. David studied the differences in the burden felt by caregivers of people living with dementia with Lewy bodies, Alzheimer’s disease and Parkinson’s disease.

One of the most exciting studies showed significant reductions in the risk of mild cognitive impairment (MCI), and the combination of MCI and dementia for the first time through aggressive lowering of systolic blood pressure in new results from the federally-funded SPRINT MIND Study. Researchers found a statistically significant 19 percent lower rate of new cases of MCI in the intensive blood pressure treatment group (systolic blood pressure goal of less than 120 mm Hg). The combined outcome of MCI plus probable all-cause dementia was 15 percent lower in the intensive versus standard treatment group.

Eisai Co., Ltd. and Biogen Inc. announced additional results of a Phase II clinical trial (Study 201) of BAN2401. This is the second Alzheimer’s clinical trial that has demonstrated both clearance of amyloid from the brain and cognitive benefits. The studies were not large enough to definitely demonstrate cognitive efficacy and the BAN2401 study did not meet its primary endpoint.

Claire and Dan finished off the week with highlights from Wednesday.

Claire also caught up with Darren Mendola, our Senior Director of Conference Services, to learn what it’s like to put on such a large event.

Closing thoughts
“I am always grateful for the opportunity to attend AAIC,” shared Claire. “I get to hear from leaders in our field who are highly invested in changing the trajectory of Alzheimer’s and dementia as quickly as possible. But just as important is the opportunity to provide the latest information to our staff and constituents throughout our chapter.”
We hope that you enjoyed our conference recap. You can view the press releases for these studies on the conference website. The 2019 Alzheimer’s Association International Conference will be held July 14-18 in Los Angeles.