Over 70 volunteer advocates and staff from our chapter traveled to Washington, D.C., last week. They participated in the Alzheimer’s Impact Movement Advocacy Forum.

More than 1,200 individuals from across the country attended. The Forum started with a roll call of the states, giving representatives from Alabama to Wyoming a chance to highlight their state policy successes.

After a day of training on the issues, advocates went to Capitol Hill. They met with members of Congress and/or their staff.

Our advocates shared their personal stories of how Alzheimer’s and other dementias have impacted their families. They shared data on the personal and financial costs. Advocates asked their senators and representatives to take the following actions:

Barbara, Jackie and David shared the details of their visit. 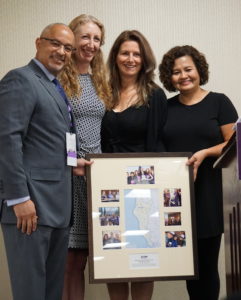 Vanessa, Erin and Elizabeth with the award

The Alzheimer’s Impact Movement gave an award to the Alzheimer’s Congressional Team of the Year. Our very own team for California’s Second Congressional District won the award. Vanessa Carter, our volunteer Ambassador, accepted the award along with team members Erin Kane and Elizabeth Santos.

Pam Montana from Danville, an Early-Stage Advisor and member of the Alzheimer’s Association Board of Directors, shared her story with the attendees. Pam was diagnosed with younger-onset Alzheimer’s disease in 2016.

Throughout the Forum, participants had a chance to hear from Alzheimer’s Association staff, key advocacy volunteers, persons living with Alzheimer’s and caregivers.

Some of the featured speakers included:

We put together a slideshow of photos from the Forum.

Advocacy is rewarding and fun

Sometimes volunteers who are thinking about getting involved with advocacy are a little nervous about meeting with legislators. To help prepare our volunteers, we provide training, supply resource materials and send advocates to meetings in teams.

We thought that it would be helpful to show you what a meeting is like. Congressman Jim Costa was kind enough to let us record our advocates’ meeting with him.