Notes from Updates on Dementia: An overview of ADNI 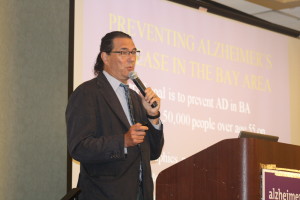 Dr. Weiner is a principle investigator on the project, which is a collaborative effort of scientists from around the world. The project was funded by $140 million from several organizations including the National Institutes of Health (NIH) and the Alzheimer’s Association – this is the largest funding for a project of this type.

According to Dr. Weiner, the goals of ADNI is to create a broad, observational clinical trial to discover how Alzheimer’s disease progresses, who develops the disease, who doesn’t and why. The project seeks to:

The research community has a lot of reason for optimism with ADNI, which has been funded on a much smaller scale since 2004. Several great findings have already come out of those first few years of ADNI so the future is bright!

About the Alzheimer’s Disease Neuroimaging Initiative

ADNI sites from around the world