On June 19, Cris and Anne will be participating in a home plate ceremony at AT&T Park for Alzheimer’s Awareness night.

Cris Welisch of Larkspur and her older sister, Anne, of Belvedere, didn’t start out as baseball fans. Cris was a football fan until she met her boyfriend, Dave. 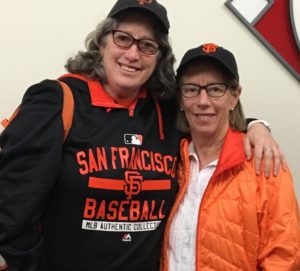 Cris and Anne, at a Giants game

Dave shared his passion for the San Francisco Giants with Cris. It expanded from there.

“We have gotten my whole family crazy about the Giants,” says Cris. Cris happens to be turning 60 this year, “just like the Giants.”

On June 19, the San Francisco Giants are holding Alzheimer’s Awareness night. Cris and Anne will be on the field at AT&T Park for a pre-game ceremony.

No family history
Cris’ family didn’t have a history of Alzheimer’s disease. It was a surprise to them all when Anne was diagnosed at the age of 60 and then Cris was diagnosed in 2015 at the age of 57. Cris and Anne also have a brother, John, who has not had any cognitive health issues.

Early diagnosis makes a difference
The diagnoses and progression have been different for the sisters. Anne did not get diagnosed until her symptoms were further along. “Unfortunately, they didn’t catch her diagnosis as early as mine,” noted Cris. “It impacted what she has been able to do.”

Cris started to experience auditory issues at work. She thought that she had a hearing problem.

Her family’s increased awareness of Alzheimer’s helped Cris get an early diagnosis. This allowed her to put things in place and make decisions for herself.

Cris has seen the difference that has made for her. She encourages others to seek an early diagnosis. “The earlier you catch it, the better your life will be while you’re going through it,” shared Cris.

Adjusting to the diagnosis
Cris was working as a healthcare benefits administrator when she was diagnosed. She had to stop working at the end of 2015, when she could no longer trust herself to perform her job duties.

Adjusting to the loss of her job and her Alzheimer’s diagnosis initially upset Cris. She became depressed.

Finding support and focus
Fortunately, Cris heard about Alzheimer’s Association support groups for people with Alzheimer’s and other dementias who are in the early stage. Cris attended the weekly group meetings for two years. 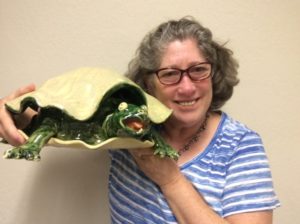 Cris with one of her ceramics pieces

It gave her a chance to talk with other individuals living with Alzheimer’s or other cognitive impairments. The support group meetings “helped me get more focused,” said Cris. “They saved my life.”

Besides Dave, her family and the San Francisco Giants, Cris also loves dogs and artwork. She volunteers at the Marin Humane Society, giving telephone advice, walking dogs and evaluating dogs. She has also been pursuing her love of ceramics.

Spending time with family
Cris’ family is very close. They get together frequently. Cris has also been the primary caregiver for her 94-year old mother, who recently had a health crisis. 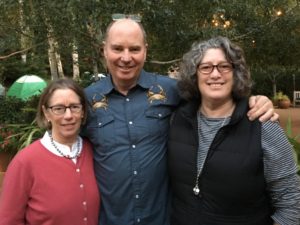 The family is trying to focus on spending quality time with Anne this year. They work to be in the present with Anne. Holding events in familiar locations where Anne is comfortable helps.

Anne struggles to dress herself without assistance now and has serious vision issues. It is scary for Cris to watch the progression of Anne’s disease. But she understands that her brain is different and her progression will also be different.

John is hoping that that the three siblings can take a weekend trip together, before Anne can no longer travel. Cris points out that Alzheimer’s “makes you be in the present, like it or not.”

Join these passionate Giants fans on June 19
Dave is a part season ticket holder for the San Francisco Giants, so he and Cris attend over 20 games per year. They have been to Arizona for spring training and have attended Giants games at ballparks across the country.

When Cris and Dave aren’t watching the game in person, they watch it on television. Cris says, “we don’t miss a game, ever.” Cris’ favorite player is Buster Posey.

Even though Anne can no longer track the game, she still loves to attend. Anne is a huge Hunter Pence fan.

Cris goes to the games decked out in her Giants gear. She has shirts, hats, scarves, earrings, bracelets, socks and shoes. She compares it to how others dress up for Halloween.

Of course, Cris also has her purple attire to support the Alzheimer’s Association. She’s still planning her wardrobe for the June 19 game, which may include her Walk to End Alzheimer’s Grand Champion shirt and/or her Buster Posey jersey.

You can join Cris and Anne at AT&T Park on June 19 as the San Francisco Giants take on the Miami Marlins. A portion of proceeds on tickets in any section purchased through this link will be donated to the Alzheimer’s Association. If you want to sit with Alzheimer’s Association staff, use this link to buy tickets in View Section 331. We encourage you to wear purple and to stop by the Community Clubhouse to get your purple rally towel. Be sure to arrive early to watch the pre-game ceremony.