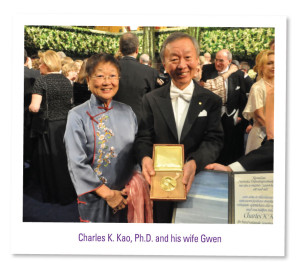 On December 10, 2009, Mountain View, Calif. resident Charles K. Kao, Ph.D. received the Nobel Prize in Physics “for groundbreaking achievements concerning the transmission of light in fibers for optical communication.” But instead of presenting a traditional Nobel Lecture prior to accepting the award, Dr. Kao’s wife Gwen Kao took to the podium and presented the lecture on his behalf. Dr. Kao has Alzheimer’s disease.

In a Nobel documentary segment about Dr. Kao, Gwen says the biggest and most upsetting part of this journey has been the loss of conversation. “He has no more intellectual repartee,” she says. “And that’s what I miss.”

Dr. Kao’s loss of the ability to communicate is ironic as he was key to discovering technology that allows global communication: in 1966, he carefully calculated how to transmit light signals via optical glass fibers 5,000 times faster than ever before.

“He has an idea in his head and he’s very persistent in carrying it through,” said Gwen in the Nobel documentary. “I think that’s what happened with fiber optics because nobody believed him and he went and chased people and persistently told them that it would work – he went all over the world actually.”

Kao’s enthusiasm inspired other researchers to share his vision of the future potential of fiber optics. Today optical fibers facilitate global broadband communication such as the Internet, allowing text, music, images and video to be transferred around the world in a split second.

Dr. Kao was diagnosed with Alzheimer’s in 2004 after friends and family noticed persistent problems while playing mah jong. In 2008, just before he retired, the media caught wind of his story and an onslaught of media attention and curiosity from the community began.

Since that moment, the Kaos have been the focus of much Chinese-language media attention. Gwen has become the advocate for this disease in the Chinese community – and Dr. Kao continues to be its face as an example of the effect of this disease on even the most brilliant of minds.

Today Gwen is Dr. Kao’s main caregiver along with the help of their two grown children. Physically, he is quite healthy but caregiving has become a 24/7 job in the last year.

The Kaos generously directed a portion of the Nobel Prize to support the Alzheimer’s Association and Gwen has attended the Alzheimer’s Advocacy Day in Sacramento where she was able to meet with lawmakers about making Alzheimer’s disease a legislative priority.