Paula Wolfert, of Sonoma, has won five James Beard awards for her cookbooks, which have focused on Mediterranean and Moroccan cooking. Paula immersed herself in the cultures and cuisines she shared through her cookbooks. She was an early champion of the benefits to eating the Mediterranean way.

Paula, on left, with friend, Nancy

A new mission: Alzheimer’s advocate
After being diagnosed with early stage dementia in 2013, Paula quickly connected with Alzheimer’s Association staff in the North Bay. Paula and her husband, Bill, filmed a series of videos to help raise awareness and reduce stigma of people living with dementia.

After she shared her diagnosis, friends in the food industry reached out to Paula. She worked with them to hold fundraisers for the Alzheimer’s Association in several cities throughout the country.  In 2014, Paula served on the Alzheimer’s Association Early Stage Advisory Group. These advisors bring the unique perspective of persons living with the disease to key efforts of the national association, including advocacy, program and consumer awareness initiatives. 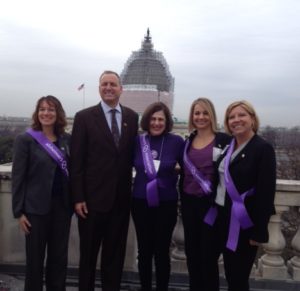 Paula has traveled to the Advocacy Forum in Washington, D.C., to meet with members of Congress. She has shared her story and encouraged them to increase dementia research funding.

Congratulations Paula, for a well-deserved honor. And thank you for all that you have done to raise awareness and reduce the stigma related to living with Alzheimer’s.