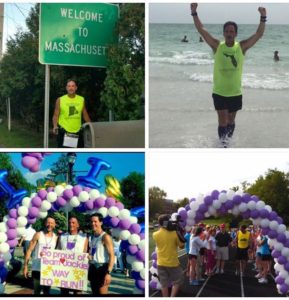 Steve Schwalbach lives in Kentucky but he will be running from Tahoe to San Francisco this September to honor his mother and raise awareness about Alzheimer’s disease. Read his story below.

How did your idea to run across states come about?

Back in 2014, I was trying for a marathon and at that point my mother had final stages of Alzheimer’s and I’m thinking “What can I do? I’m not a doctor or a scientist to come up with some wonderful drug. I’m just a runner and a construction worker.” So I got this idea of running the state of Kentucky. On the state of Kentucky, I ran 210 miles.

The following year, in 2015, I called an ultra runner friend of mine and we teamed up to run from Cleveland, Ohio to Cincinnati for 328 miles.

Right before I did that, my mother passed. At that time, she was in Florida so I decided to run the state of Florida, too. There’s Daytona Beach on one side of the Coast, where we used to spring break as a family, and that’s the reason why I took that as a starting point. The finish point was at our house in Sarasota.

This year, on September 2nd or 3rd I’ll be in Tahoe and each day I’ll run 30-35 miles. My run will finish at the San Francisco Walk on September 10th.

Can you share some memories from your run so far?

The saddest moment was when I ran Florida. It was on the anniversary of my Mom’s passing. There is this type of trees that always remind me of her and I just constantly ran through these trees we grew up with, and it was one of those miracle days where it felt like she was there talking to me. 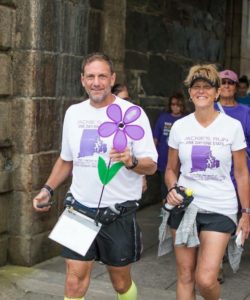 I’ve run over a thousand miles for Alzheimer’s awareness so far and each day there is a different story. One day I was down in Kentucky and this guy asked me for directions… I told him I was running back home to Cincinnati and he looked at me as if I was half crazy.

What is the reaction of people you meet on the road as you’re running?

I carry a pamphlet with me and I give that to people, and many people are amazed. There have been many times where people would give me cash while I’m running. Some people out there are just grateful that I’m trying to bring awareness. People I don’t know come out to run with me because they’ve heard about Jackie’s Run.

So anyone is welcome to join you?

Yes, I’d love to meet other runners and have them run with me.