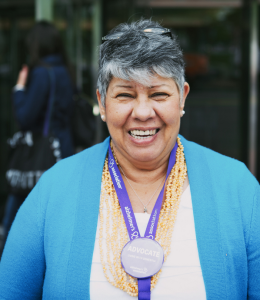 A few weeks ago, I developed a cough. I went to the doctor, they checked everything out and sent me home. But I wasn’t getting better. I started to worry when the cough got really bad and I was having a hard time breathing.

As with most emergency rooms, the waiting room was pretty full. I checked in, waited my turn and was finally called in.

My first stop was a little room where I talked to someone who got all of my billing and insurance information squared away. She asked me if there was anything she should know about my health history.

“Yes,” I said. “I have Alzheimer’s disease, so you might have to explain things more than once and go slow. And if something is really wrong, you will need to call my son to explain everything.”

She responded with, “You sure don’t look like you have Alzheimer’s!”

My next stop was intake, where I encountered the same question – is there anything the nurse should know?

I went through my spiel again, letting her know that I have Alzheimer’s disease and may need to hear things more than once and to call my son if there was a very serious or complicated issue. “I can’t believe it. You just don’t look like you have Alzheimer’s!”

Then, the doctor came in. He, too, asked if there was anything he should know about my health history. I told him about my Alzheimer’s and explained that even though I had been a nurse for many years, sometimes I just don’t understand. He said, “You gotta be kidding me! You don’t look like you have Alzheimer’s!”

This conversation was repeated three more times that day – with the respiratory therapist, another nurse and an x-ray technician. Needless to say, having six different health care professionals tell me that I don’t look like I have Alzheimer’s disease was surprising and a bit troubling.

What exactly does someone with Alzheimer’s “look like?” What should I look like? Should I be unresponsive to my surroundings and bed-bound in a nursing home? Should I be incoherent and confused about where I am?

Understand that I was treated with the utmost respect and kindness by everyone in the emergency room, both before and after I told them I had Alzheimer’s disease. They even took an extra step to show me to my taxi back home so I didn’t get lost along the way. My experience was a positive one – but it is a telling example of how deep stigma runs with this disease.

The fact that even health professionals – who should know more about this disease process than the average person – were surprised by seeing someone with Alzheimer’s who is vibrant, energetic and articulate speaks volumes.

I hope medical professionals in all departments, at all levels make an effort to better understand what Alzheimer’s disease “looks like.” And I hope that people in the early stages of Alzheimer’s share their diagnosis with more people. This disease may be fatal, but it doesn’t start with bed bound patients and utter confusion. It starts with people like me, who have a face, name, opinion and fulfilling life.

During my visit to the emergency room, I had a meaningful conversation with the x-ray technician, who was one of the people who told me I didn’t look like I had Alzheimer’s. Whenever I speak in public or speak as an advocate for Alzheimer’s awareness and the Alzheimer’s Association, I ask people to remember me. But before I could even ask, she said, “I will always remember you. When I am feeling down, I will think of you and of today and I know it will help me.”

It made my day to know I could positively influence someone’s life – and it keeps me motivated to advocate and share my story so we can end the stigma associated with this terrible disease.