Reflections on 2014 Advocacy Day in Sacramento 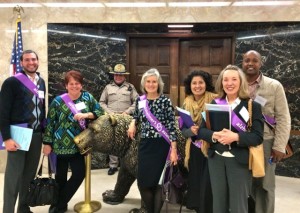 My team and I outside the Governor’s office in Sacramento.

On March 4, more than 130 “ordinary” Californians — all touched in some way by Alzheimer’s disease — convened in Sacramento for the Alzheimer’s Association’s annual Advocacy Day. We came from across the state, as far south as San Diego, as far north as Red Bluff, from the Bay Area, Orange County and beyond. Each volunteer took a day off work, had someone babysit the kids, arranged care for a loved one living with Alzheimer’s, or set aside time they might have spent otherwise to come to the State Capitol and make their voices heard.

We were on a mission: to advocate for improved public policies that recognize the diverse needs of people living with Alzheimer’s in their homes, communities and residential settings.

It’s not unusual for people to feel daunted by the prospect of lobbying an elected official. But new volunteers quickly learn what the veterans already know — that people living with Alzheimer’s and those who care for them are the “experts,” and that the most effective advocacy comes from sharing our stories respectfully and with love.

Advocacy Day 2014 began with welcoming remarks by Robb Fanno, chair of the California Council of the Alzheimer’s Association. Then Lou Bordisso, diagnosed with younger-onset Alzheimer’s disease in 2009 at the age of 56, reminded us why we were there. Since his diagnosis, Lou has become an eloquent champion for those like himself living with the disease. With each passing year, the process of advocacy becomes more difficult, Lou said. He and others living with Alzheimer’s are relying on “ordinary” people like ourselves to take their message to the legislature.

With his audience in rapt attention, Lou described how as a child he endured major surgeries, which required him to re-learn to walk not just once, but twice. As he convalesced, each day his father would hold out his arms, grasp Lou by the hands and encourage him to take a step. The next day, his father would extend his arms and help him take two steps, then three steps the day after that, and so on, until finally Lou could walk again. When you visit your legislators today, Lou told the advocates, envision yourself holding out your arms to people you love who are living with Alzheimer’s and cannot speak for themselves. Remember that you are carrying them with you, Lou said, as you tell their stories and advocate for what they and their caregivers need. Profoundly moved by his remarks, the audience gave Lou a standing ovation.

We were then briefed by experts on the key messages and legislative “asks” to be conveyed in our meetings:

After time for questions and answers (and a tasty box lunch), we were matched with other volunteers in our districts, and set off to the Capitol to meet with our legislators and their staffs.

By day’s end, our arms metaphorically outstretched, we had carried our stories and made our legislative requests to nearly all members of the California legislature or their staffs. It was a satisfying day for “ordinary” people on an extraordinary mission — to improve the lives of the 660,000 Californians living with Alzheimer’s, and ultimately to realize a world without Alzheimer’s disease.

Here are more photos from the Alzheimer’s Association Advocacy Day in Sacramento: