On a Personal Note… (Lou Bordisso)

Two years ago, at the age of 56, my neurologist informed me that I had been diagnosed with Younger-onset Alzheimer’s disease. My diagnosis was both a shock and a relief in that it finally put a name to and made sense out of all the problems I was having at work and managing my personal affairs. 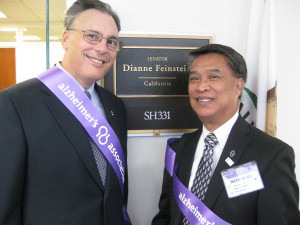 My experience living with this diagnosis is similar to many living with Alzheimer’s. When first diagnosed, my life took an unexpected turn. My future plans, hopes and dreams were altered by a few short words from my medical provider. Abruptly, my life, as I had known it, and the plans I had for it, changed.

To make matters worse, I often would forget to keep appointments and it took more time learning and retaining new information. I tended to misplace important paperwork. Increasingly, I needed help with managing my personal finances.

Recently, I was paying bills and writing checks when I realized I forgot how to write the number seven in script on a check. Needless to say, I was devastated and unable to reach any of my care providers or medical professionals. In a panic, I called the Alzheimer’s Association’s 800 number for help.

A very wise person at the other end of the line gave me a sense of hope. With calming advice, she said: “Lou, it is not the end of the road, just a bend in the road.” She encouraged me to focus on my strengths rather than dwell on my shortcomings. Her words of encouragement meant a lot to me and helped me to get through a very rough day.

The Alzheimer’s Association has also given me a chance to put a face on Alzheimer’s. In my role as a volunteer advocate and a member of the National Early Stage Advisory Group for the Alzheimer’s Association, I am able to change how others think about or treat those of us living with this disease. I have had the opportunity to help shape the quality of care not only for me but for the next generation of those diagnosed with Alzheimer’s.

For example, during a recent advocacy meeting with a Congressional Legislative Aide, I realized how important it is to sit down face-to-face with our lawmakers and to tell my story of what it is like to live with Alzheimer’s. Although Alzheimer’s statistics and research data are important, what makes a difference with politicians is putting a face on this disease and sharing my Alzheimer’s journey. Consequently, I have been able to influence political discourse, helped to foster conversion of heart, and often changed the perception about Alzheimer’s disease.

Recently, while having coffee in between Congressional visits on Capitol Hill in Washington, D.C., I overheard a lobbyist sitting behind me at another table talking to other lobbyists saying, “If you do not have a place at the table, you will be on the menu.”

My late mother used to say: “The squeaky wheel gets the grease.” Let each of us consider using our voice, our time, our talent and our treasure to be a “squeaky wheel” among our friends, family members, health care professionals, researchers and politicians in order help bring awareness, encouragement and hope on behalf of all living with the disease of Alzheimer’s now and in the future!

At the end of the day, when all is said and done, it all comes down to making the choice between allowing this disease to suppress me or choosing to become empowered as a fighter in the battle against Alzheimer’s. My choice is to be a fighter and I invite each and every one of you to join me in the fight to live in a world without Alzheimer’s!