Caregiver Support from Those Who Understand

Caregiving for a loved one with Alzheimer’s or another dementia can be an isolating journey. Unless you have a friend or neighbor who has been a caregiver for someone with Alzheimer’s, it’s hard to find people who truly understand your situation.

Barbara Redick of Livermore was the primary caregiver for her husband, Chuck. While she had been concerned about his behavior for some time, Chuck received a diagnosis of Alzheimer’s disease in 2013.

Figuring it out on her own at first 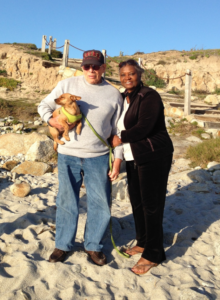 As she settled into her caregiving role, Barbara learned how to be patient and let things go. When she questioned why Chuck put on his tuxedo to mow the lawn, he would counter, “what’s wrong with it?!” Barbara learned to respond that there was “nothing wrong.”

If Chuck said that he wanted to get up early the next day to cut down all of the backyard trees, Barbara would agree with him. She knew that Chuck liked to feel that he was in charge and that he would not remember the idea for long.

While Barbara’s friends and neighbors tried to be supportive, most did not have experience with Alzheimer’s caregiving. When Chuck started to get lost on walks, neighbors would ask Barbara questions. While they were probably trying to help Barbara problem-solve, their questions focused on whether Barbara had done something to make Chuck leave. Barbara felt alone and unsupported. 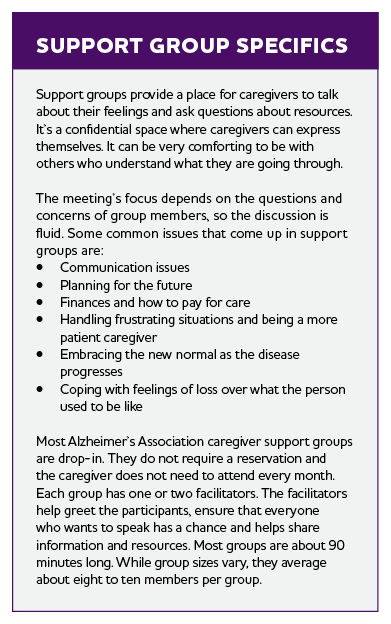 Behavioral challenges led her to a support group
As the disease progressed, Chuck had more difficulty understanding the world around him. One day he tried to put the electric weeder in the swimming pool. Chuck also started to exhibit more anger and aggression.

One of the recommendations was that Barbara attend an Alzheimer’s Association caregiver support group. When she first went to the group, Barbara was curious. She was eager to experience the group and to share what was going on with her and Chuck.

Meeting others who had similar experiences
While each family’s journey with Alzheimer’s is different, caregivers often experience similar challenges. “Neighbors and friends don’t live with the person with Alzheimer’s, so they don’t think it’s as severe as it is,” shared Barbara. “Getting out to talk to other people in the support group helped me.”

Group members validated what Barbara was experiencing and how she was handling the situation. They helped Barbara feel understood and supported.

This group was different than a prior educational group Barbara had attended through her health system. This group focused on tips and resources.

Members shared their challenges and helped each other come up with ideas for managing these situations.

Barbara appreciated the helpful information she received. From the other members and facilitator, Barbara learned:

Closing out her journey
Barbara attended the support group for about three years. She shared her learnings with fellow group members. She discussed what worked for her: agreeing with Chuck and being patient.

Barbara had seen how caregiving had affected friends of hers. Taking breaks to attend the support group, having lunch with friends and participating in Bible study helped Barbara. She encouraged other caregivers to “find ways to get away from the caregiving situation without feeling guilty.”

Knowing that Chuck was safe and receiving good care comforted Barbara. The most rewarding part of her caregiving journey was seeing Chuck smile when she walked into the room. Chuck died from Alzheimer’s in November 2017.

Supporting other caregivers
For those starting the caregiving journey, Barbara recommends early planning. Create or update legal and health care decision-making documents. She encourages caregivers to start looking at community resources such as home care, day programs or assisted living before your loved one needs them. That way you will know what your options are, whether you need them or not. Waiting until a crisis occurs can be more stressful for all involved.

Barbara is looking into becoming a volunteer support group facilitator for the Alzheimer’s Association. “I never thought I’d be involved in continuing to support others,” says Barbara, “but because of the way the illness impacted me, that’s what I want to do.”