On a Personal Note: Heather Deming 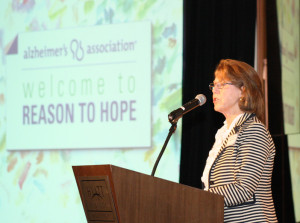 “My name is Heather Deming and my husband Bill and I feel privileged to share our story with you. We are learning to increase our understanding of this baffling disorder with the goal that together, we will all make strides in caring for our loved ones and ourselves.

Alzheimer’s takes its toll on parents, siblings, spouses, friends. Our roles vary according to our relationships.

Bill and I met in 1981 having both been married before. Together, we had five adult children and in the years ahead would add six grandchildren. Perhaps, it would be helpful to share Bill’s life before I met him:

He was born in Yonkers, New York. After high school, he took a job in New York city described as “photographers aide.” This first job would guide the rest of his career. The photographer was Richard Avedon, the revolutionary photographer who redefined fashion photography as an art form.

For two years, Bill learned photography from someone who would soon be at the top of his field. Then the Korean War intervened and Bill chose to enlist in the Air Force. Fortunately, the Air Force recognized his potential skills and sent him to Boulder, Colorado for photography training, which morphed into high-altitude reconnaissance photography. Those skills took him to Japan and launching of the North Korean overflights.

Following his four years in the Air Force, Bill went back into civilian life in the aircraft industry in an exciting career filled with travel and adventures. He was trained and hired for the U2 aerial reconnaissance program, which was critical to the overflights of Russia and the Cuban Missile Crisis.

With this background, I could foresee a life of travel and adventure with him. We married in 1982 and after a five-week honeymoon in Scotland and England, we bought a home in Salinas, California and settled down to a comfortable new life.

Some years later, Bill experienced a call to the ministry and returned to complete his education in Theological Studies. He was ordained as a deacon in the Episcopal Church in 1993 and served 10 years at St. Matthias Church in Monterey.

Between 1993 and 2003, he needed to have a number of hip and back surgeries. It was through this period that I began to notice changes in his behavior, interests and outlook on life. Was it the beginning of Alzheimer’s? We will never know. Bill’s natural talents: artist, carpenter, home and garden remodeler – all these changed. By 2005, he found it necessary to also retire from his ministry with the Episcopal Church.

He says he was not bored, but I found myself stuck with a man at home 24/7. I found these early years, before diagnosis, very hard because I did not understand the underlying cause of the changes. I suspect that scenario may sound familiar to many of you!

Alzheimer’s is a baffling disorder that steals the life of our loved one and ourselves. To better understand what was happening to me, I have used Dr. Kubler Ross’s “Stages of Grief.” This is not necessarily a linear model but it is a predictable model of what, in hindsight, Bill and I have experienced. You may have experienced some of these stages yourself.

As I progressed through these stages, slipping forward and backward, I discovered I was and am experiencing a paradigm shift: simply, finally accepting that Bill has continued to unconditionally love me. It is a less intimate, less soul-based love; it is the love of the care-taker for the caregiver.

It is on the energy of that acceptance that we continue to grow, even while Alzheimer’s tries to take us down. Intimacy is clearly a big issue, an important issue and needs to be addressed openly and honestly whatever the relationship – parents, spouses, siblings, friends issues will crop up. I encourage you to get help. Whether it be household help, gardening, shopping, banking, whatever. This is a big task, it cannot be done alone.

Involve your children, grandchildren, etc. in whatever ways are good for all of you. Clearly, let them know that not only does the patient need their help and support, you do, too!

Finally, find way to have a good belly laugh on a regular basis. Laugh with your loved one. It may come to where you laugh for them as this attribute wanes. Not taking ourselves too seriously is a good thing.

Find an Alzheimer’s support group in which to share, vent, get support. We are not alone. Personally, our support group provides two separate classes at the same time. I meet with the caregivers and Bill meets with other clients, both groups are supervised by the loving staff of the Alzheimer’s Association and the Carmel Foundation. Use these types of available resources. Include the services of elder attorneys which provide informative lectures free through the Alzheimer’s Association.

An important reason to hope lies in recognizing that changes can be a catalyst for a new way of living. Early on during the disease process, I thought Bill was impossible to get along with. Over time, and recognizing my own need to understand all the stages we were both going through: denial, anger, bargaining, depression, and finally acceptance, I learned that love goes both ways.

If he could no longer love me in the same ways, I could relearn to love him, in new ways. That has been my greatest gift – loving him from the inside out, warts and all! Loving him, caring for him as long as I can allows my own heart to open up. It is capable of being warm and giving. Bill is teaching me how to be love.

We are not a disease, we are two open hearts.”