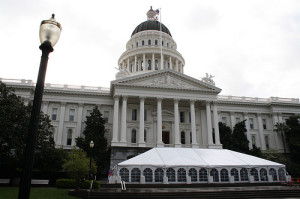 Saturday, March 31, dawned heavy and cloudy and by the time I left my gym at 8:30 a.m., it was pouring. But, had the sun not come out on schedule at precisely the moment I was meeting my new advocate (a “comrade in arms” in the fight against Alzheimer’s), his enthusiasm would have made me forget any gloom that may have been in the sky.

I wanted to meet Andrew as I knew he went to the Alzheimer’s Association’s Advocacy Day in Sacramento on March 28 for the first time, so I was interested in his experience. He has a sad story – it’s similar to the millions of people dealing with Alzheimer’s, but as every story in this journey is unique, so is Andrew’s.  It represents, first of all, the love he felt for his mother when she was diagnosed with Alzheimer’s and then the reality set in. The emotional toll and financial burden followed. Sound familiar?

Andrew is resourceful. Once he learned of his mother’s diagnosis, he knew that knowledge about the disease would help.  So, he reached out to the Family Caregiver Alliance in San Francisco and the Alzheimer’s Association for support, guidance and trusted information. He immediately began receiving the Alzheimer’s Association’s newsletters and when information about this year’s Advocacy Day was posted, he was firing on all engines. Last year, he wanted to attend, but couldn’t. He made a commitment to himself that this year, he would.  I know that feeling; from the first time I said “Yes, let me see what’s going on and how I can, if not influence the decision makers, at least let them hear from me,” I was hooked. That was Andrew’s feeling, too.

So, how did Andrew react to that day in Sacramento?  Andrew is savvy, so he’s not likely to blown away by much. But this event captured his soul. Because he had accessed the services of both the Family Caregiver Alliance and the Alzheimer’s Association, the theme of the “Caregiver” resonated with him.  He was inspired by the two speakers from California’s legislature – Assemblywoman Holly Mitchell and Assemblywoman Mariko Yamada – who spoke passionately about California’s obligation to serve those with Alzheimer’s. They encouraged the audience to contact their local district offices and tell their stories about why services supporting those with Alzheimer’s and their caregivers are so vital. It’s evident that many of our policy makers simply don’t connect the dots. Eliminating a couple of million dollars in a program that services so many will end up costing much more in more expensive care, such as nursing home placement. This is not a hard concept to grasp.  So, why don’t they?

As a first-timer, Andrew was a bit nervous getting in front of legislative staff to tell his story, but he soon got his stride and quickly understood the importance of exposing his personal challenges.

The more we know, the better.  The more we educate our legislators, better still.  Andrew is doing just that and is eager to stay involved.

I salute all of the Andrews I’ve met over the years.  Join us if you haven’t already.  If we don’t speak, who will?