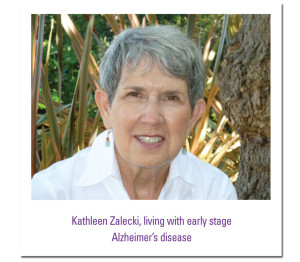 In January of 2009, Greenbrae, Calif., resident Kathleen Zalecki was approached by her daughters who expressed concerns about her memory. As an active almost-65-year-old who cycled regularly and was living a full and busy life, the conversation was challenging.

“My first reaction was denial and anger; what they were saying was difficult to hear and accept,” says Kathleen. “But I was eventually able to recognize changes that were becoming problematic and I agreed to get tested.”

She was officially diagnosed with Early Stage Alzheimer’s disease in Spring of 2009. She also began making big lifestyle changes in anticipation of the progression of her disease. For starters, she sold her house and moved into a much more manageable condo located closer to her daughters.

“I miss the neighbors, but not the house,” she says.

The move also put her closer to the UCSF Memory and Aging Clinic, where she currently participates in a clinical trial. She considers participation in research an extremely important commitment.

“This is a significant disease that has affected friends and relatives I was especially close to,” she says. “I always knew it could happen to me.”

Today Kathleen says she is grateful to still be highly functioning and driving – but she realizes she will need to give up driving eventually, which will be a hard road to cross.

But she is determined to stay optimistic. She volunteers with several organizations, hikes, observes a brain-healthy diet, keeps her mind active and stays engaged with family and friends. She also attends an Alzheimer’s Association Early Stage support group.

“We’re a mixture of ages, professional backgrounds and interests, but we gel,” she says. “It’s a place to go where everyone in the room understands.”

She suggests that other people diagnosed with Alzheimer’s disease research as much as possible and record doctor appointments so that there is a record of the invaluable information covered during the appointments. She also says a critical part of diagnosis is to not be ashamed and to share with friends and family and to ask for support.

“Most people have been receptive to my honesty and want to know more and be there for me,” she says. “Plus, I would rather them think I have a disease than think I’m just odd!”

Her advice for people with a loved one just diagnosed with Alzheimer’s is to be patient and offer support in areas that will truly help the individual without overwhelming them.

Kathleen is particularly comforted by the memory of visiting a close aunt who had Alzheimer’s. Although her aunt forgot she had already introduced Kathleen to people the day before, it didn’t matter. The joy she saw in her aunt’s eyes every time she said “˜this is my niece, Kathleen,’ made it all ok.

“I want to put as positive a face on this disease as possible,” she says. “I believe that laughter and hugs are essential for everyone facing this disease!”