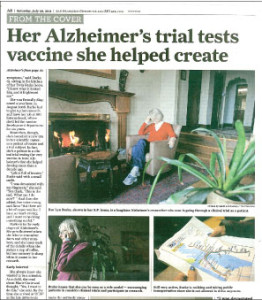 “Both a grandmother and an aunt of mine had Alzheimer’s disease, so I knew what it looked like – and it frightened me. I had been experiencing some difficulties with memory for some time when one day, I decided to test myself.

While driving to Stanford Research Institute, where I was the director of Infectious Disease Research, I tried to do multiplication tables in my head. I couldn’t remember how to do them. I thought, “Why can’t I do simple math?” That’s what took me to UCSF to get a diagnosis. Of course, I was devastated.

The first thing I did was go online, where I found the Alzheimer’s Association. Through the Association, I’ve been able to meet many people who, like me, have had to stop working long before the normal age of retirement.

Part of my career as a research scientist involved working with Elan Pharmaceuticals on a therapy for Alzheimer’s disease. I was trying to reduce the amount of amyloid plaque in the brain by making antibodies to the proteins in the plaque. When I was diagnosed with the disease, I knew immediately that I wanted to be part of an Alzheimer’s clinical trial.

You only get to participate in one clinical trial and I wanted to find the best one for me. After meeting with leading experts in the Alzheimer’s research field, I decided to join a clinical trial at UCSF, where I receive an antibody against an amyloid plaque protein that is an extension of the very work I did at Elan Pharmaceuticals.

Life is full of incredible ironies.

I feel like I win whether this trial proves successful or not. If the monoclonal antibody doesn’t work, we’ve learned we have to move on to something else. However, even if it just works partially to extend the time people are cognitively functional, it would be huge. And if it works as is hoped – well, that would be just fantastic.

When I first got my diagnosis, I thought it was the end. But today, I have so much energy and I want to do something useful. We need to be more visible and let people know that Alzheimer’s is a cliff that we are about to fall off of. As a biomedical researcher, I was very impressed by how effectively the people suffering from AIDS are advocates for finding a cure. It’s harder to be a powerful advocate when living with Alzheimer’s, but I am determined to do it because it is a cause about which I am passionate.

I have already talked to legislators in Sacramento and local congressional staff. I’ve found a worthy cause that serves me, my family and the country. I know that with increased research funding, this problem is solvable. After all, it’s just molecular biology!”