We have a pretty good life 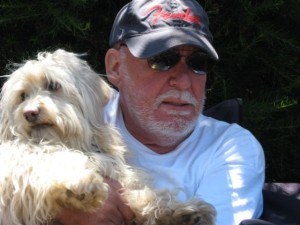 John and Tobey hanging out.

Just the other day John and I were taking a drive to the Golden Gate Railroad Museum. We planned on having a quick lunch and then board a train powered by a restored steam engine for a scenic, two hour trip complete with wine and cheese. John loves trains and this is part of my 21st wedding anniversary gift to him. As we drove, John kissed my hand and said, “We have a pretty good life.” I smiled at him and agreed.  Two years ago, I wasn’t smiling.

When John lost his job and couldn’t explain the vagueness and confusion that surrounded his thoughts, I immediately scheduled an appointment with our family physician. Lab tests, MRI & CT scans as well as many other evaluations gave us unexpected answers.

His early onset Alzheimer’s diagnosis was the most devastating; however I was also surprised by other discoveries. I found out that John had cataracts in both eyes. His vision had diminished from a world filled with color to one sepia toned and dark. A hearing test also proved that John really hadn’t been ignoring me but actually lacked the capacity to hear 60% of higher tones; unfortunately the range in which I speak.

I found it hard to believe that John’s overall health had deteriorated to such an extent without my knowledge. I now realize that he was afraid to tell me what was going on with him mentally and physically. He thought that ignoring everything would make it all go away. Instead he became confused, isolated and depressed.

John immediately began treatment with Namenda. Five months later Aricept was added. Three months after that he signed up for a 2 year clinical trial. Two cataract surgeries, a hearing aid, exercise and a better diet have improved his overall wellbeing. A long overdue colonoscopy located and removed polyps, several of them large enough to cause concern, but luckily caught in time. A dental exam underscored the need to keep his gums healthy and possibly protect brain function. Lastly, with the blessing of our doctors, we stopped a prescription with an unfortunate side effect of causing John severe muscle pain.

I’m still working a full-time job and he is left at home alone every day. To avoid isolation, he makes phone calls every Tuesday afternoon to an elderly aunt and each Friday has breakfast with an old friend. We attend church and a weekly Alzheimer’s support group. To help John maintain a daily pattern, he has assigned a specific household chore to each day. We also adopted a dog. John is completely responsible for the care and feeding of Tobey. They are regulars at the local dog park where they both enjoy the companionship of other dogs and their humans.

It has taken an enormous amount of effort from both of us, but now, near the second anniversary of John’s diagnosis he is in great shape. I can honestly say that he is healthier today than two years ago. And yes, despite his diagnosis we have a pretty good life.