On a personal note… (Pam Vickerson) 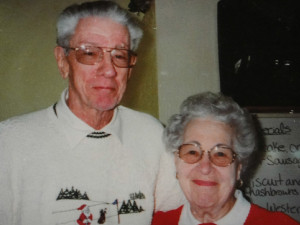 I was living in San Jose, California when my parents visited from Arizona to help take care of me while I was recovering from surgery. My dad was driving me to a medical appointment when he drove right through a stop sign. I said “Dad, you just drove through stop sign!” He looked at me with a dazed expression – he didn’t even know what “stop sign” meant. During the same visit, he needed to use a power drill. My dad, a retired IBM engineer, looked at me and said, “I don’t remember how to use this.”

He was diagnosed with dementia in 1992 and three years later received an Alzheimer’s diagnosis. I would ask him what it felt like to have Alzheimer’s. He told me that in the days he went to work as an engineer he could just look at something and see its schematic in his head – but with the onset of Alzheimer’s he couldn’t see those things any more. He said that he generally felt pretty good in the morning, then as the day went on he would start to feel what he described as a fog rolling in. It would get hazy, then he’d get sleepy and then he wouldn’t remember anything. I remember those days when I could see him glazing over. He would nod when I asked him if the fog was rolling in again.

If my dad was open about the disease, my mom was pretty much the opposite. In the first three or four years after his diagnosis, she refused to tell anyone her husband had Alzheimer’s. They used to be active walkers, golfers and have a full social life. But as my dad’s disease progressed and the symptoms became harder to hide, they slowly stopped doing these things. With my dad standing at 6’3” and my mom at a mere 5’3”, the physical demands of caregiving took its toll. But still, she refused any help – they were the loves of each other’s lives and she didn’t want anyone else taking care of him.

This was one of the hardest times for me. I was at the height of my career and my brothers and I lived in different states. We flew out to visit them as often as we could; we called to check in on them almost daily. But still, being a long distance caregiver can leave you feeling helpless.

I was able to find a local volunteer group that could help my mother with caregiving. At first, Mom would do even more work to get ready for the caregivers’ visits – she’d make them lunch and bake cookies, then she’d wait in the car until they left. Eventually she let herself leave to run errands and have time to herself, but she was never gone for more than two or three hours at a time. And even then, she baked cookies for the volunteers! 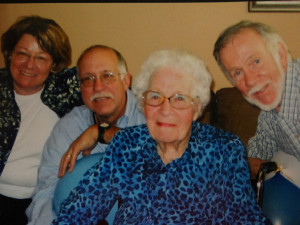 Pam, her mother and brothers

I finally was able to convince my mom that despite her herculean efforts at caregiving, Dad needed better care than she was physically able to provide. She agreed and we moved him to an assisted living community. In 2000, my dad and I were watching a basketball game in his room. My dad, who hadn’t spoken my name in years said, “Pam, come here. I love you.” He died that night. That moment of clarity was wonderful and unbelievable.

My mom’s health declined a lot after my dad’s death. In 2008, she too was diagnosed with Alzheimer’s disease. She passed away in 2011.

I started a Walk to End Alzheimer’s team in Reno in honor of my parents in 2010; both my team and my involvement have grown since then. I’m now on the Walk committee and I serve as an advocacy volunteer. My dad was diagnosed with Alzheimer’s when he was 70, but I know it started a long time before that. As a Boomer, I’m acutely aware of my own risk and highly motivated to do anything I can to cure, prevent and treat it. It may sound selfish, but I volunteer because it’s something I can do for myself, too.