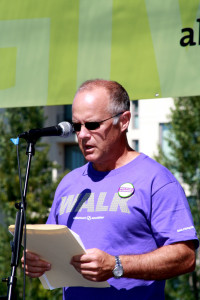 5,000 people gathered at Mission Creek Park in San Francisco two weeks ago for Memory Walk – the last Memory Walk, but more about that in a minute. This was the beginning of the “marching season” for the Alzheimer’s community. Across the country, in over 600 locations, families, professionals and increasingly people with Alzheimer’s gather to raise funds and awareness, to move concern for our cause. For our chapter, it is one walk down, eight to go!

What a beautiful day! The new location was a hit with most of the folks who came up to tell me about their day. See some great photos here: San Francisco Memory Walk Photos

Mostly, we liked the increased visibility – people in San Francisco saw us. The challenge for us internally was that in moving the event site we tied ourselves to the Giants schedule which ruled out the month of October (and since AD family member and Giants Manager Bruce Bochy has been so helpful, “Go Giants!”) moving the event up a month for our veteran Walkers.

Sometimes we are reluctant about the fundraising part of our work. Both staff and volunteers are drawn to us by the mission and the idea of asking for money, well, it makes some uncomfortable. But the Walk accounts for 20 percent of our funds. Young researchers across the country are looking to us for help, and late tonight someone will call our Helpline and we will be there for them. So, if you were at the Walk and you haven’t met your team goal, keep after it!

Now on we go to Memory Walk in San Jose, Santa Cruz, Sacramento, Fresno, Chico, Reno, Petaluma and Monterey. Staff and un-told numbers of volunteers work hard to make these events successful, to engage their communities in the cause – a world without Alzheimer’s and quality of life for those living with it.

In San Francisco we were joined on stage by Mike Fisher – no relation – former Chief of Police for the city of Lafayette, CA. Diagnosed with Alzheimer’s at 52, Mike inspired the crowd, bearing witness to the fact that Alzheimer’s is something that he’s living with, not the end of his relationships and certainly not keeping him from championing the cause. I am always inspired by our early stage folks who stand up to share their stories and say, “enough!”

After this season, we will talk about Walk to End Alzheimer’s. I like it.